Entertainment   Bollywood  26 Jul 2020  Indian Matchmaking: When girls do the checking out
Entertainment, Bollywood

Indian Matchmaking: When girls do the checking out 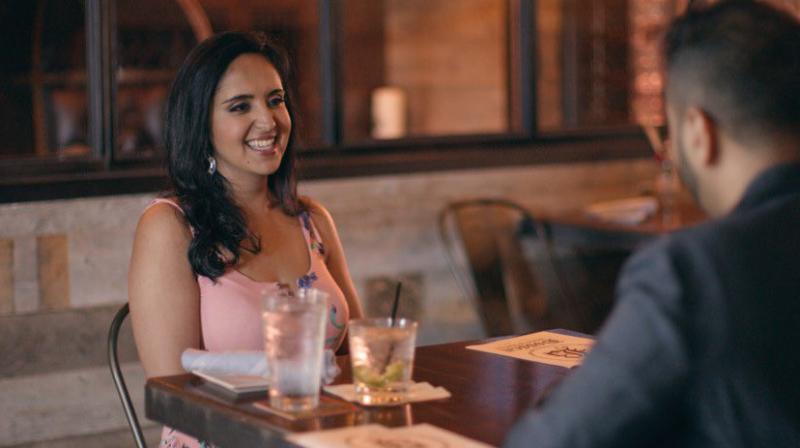 Indian Matchmaking is an eight-part reality show on Netflix.

Several desi knickers have been twisting, turning and wedging uncomfortably into entitled Bharatiya bums since Indian Matchmaking, an eight-part reality show, dropped on Netflix. The reason is simply this: The marriage market, which was till now thought to be exclusively under the command and control of boy log and their judgy Mummyjis, suddenly seems to have a new claimant — a certain type of women they hate, i.e. girls in dresses who are independent, successful, single. Women who love themselves, know their mind, and the kind of partner they seek.

Many of these girls on Indian Matchmaking have already tried dating-shating to find a mate, and are now seeking the professional services of a matchmaker to help them browse through and shop for a suitable boy.

But while most Indian boys go to see girls with their Mummyjis and Daddyjis in tow, these girls are driving solo in their cars to check out the boys. They meet them in restaurants where they drink, chat, laugh, order non-veg food and, after all that, reject the boys. Haw-hai!

The world of matrimonial alliances is in wide-eyed shock. Jaws have dropped and words are not forming. Just froth. Because seeing these girls prance about expressing their opinions is conjuring a scary scenario in the minds of Mummyjis cradling their precious boys — that their saputs may not be special after all, and may well be rejected.

And in all this, the main object of loathing is one Aparna, a 34-year-old Sindhi girl from Houston, Texas.

Some racy, lacy, millennial panties are also in a twist over the whole transactional, loveless nature of desi matchmaking. Everytime they hear the words "girls have to compromise... adjust" uttered on the show, which is often, a raging tweet or Facebook post follows.

This hate is directed especially towards Preeti, the rich Mummyji of 25-year-old Akshay. After studying abroad, he has joined his Daddyji's business and wants a girl just like Mummy, but adds that he must also feel attracted to her. If you paused at this sentence, sensing a deep issue, scream “Oedipus”.

Preetiji’s list of the qualities her prospective bahu must possess is long and baffling — “flexible, compatible, smart, cultured, but not too beautiful". Above all, she must smilingly accept that it's “my house, my rules”.

Enter the star of the show — Sima Taparia, “Mumbai’s top matchmaker”, who also operates in Bangkok, Hong Kong and America.

Simaji is a miracle worker, a Santa Claus of matrimony whose phone and folders are full of photos and bios of eligible boys and girls in search for a mate.

Give her the most daunting, strangest wish-list and, voila, she will produce a match.

Simaji believes in destiny but leaves nothing to chance. She meets with the boys and girls at their home and chats with their families to figure out their lifestyle, nature, likes, dislikes.

She also uses the services of a face reader, an astrologer, a panditji who matches kundalis. And sometimes, when she senses a knot, confusion, she sends her clients to a life coach.

Practical, empathetic, clear-headed, and a straight shooter, Simaji’s only rule for all her clients is that they must pursue only one prospect at a time.

The world that believes in marriage is split between those who pursue love and believe in finding, trying out their soulmate themselves, and those who seek and follow the help, advice and approval of their parents, elders.

Indian Matchmaking is devoted to the latter. Within the conventional, rigid setting and rules of arranged marriages, the show manages to stay focused on boys and girls who are in search of happiness, but with the firm belief that their happiness rests on the happiness of their family.

So there is a lot that the series doesn't show. Sex, or talk of sex, of course, for obvious reasons. Though at one point, when a panditji says that boys and girls also seek compatibility in bed, Simaji looks as if a dead rat has dropped from the ceiling into her lap. The topic is never broached again.

The series also doesn't show the ugly side of Indian shaadis, of give and take, dowry, demands.

If Indian Matchmaking had only been about marriages that are finalised around a dining table by elders sitting with folded hands and judging, figuring out everything apart from how the boy and girl will fare in bed, it would have passed without a ripple, like the long matrimonial ads seeking fair complexioned girls do, every weekend. But because it also follows girls sitting across restaurant tables, sipping cocktails and wondering, even as they chat smilingly with the boys, when they can leave, it’s causing much discomfort. And then there’s Aparna, who has hassled not just Simaji, but many others.

A busy, motivated lawyer who loves traveling, Aparna is looking for a man who will “fit into" her life. Very clear about what she wants, Aparna doesn’t like to waste time and prefers short, 55-minute dates.

A Sindhi would be great, she says, and doesn't care about a sense of humour nor does she want an overly romantic guy.

“There is nothing about me that I need to change or evolve,” she says, and has in the past rejected a boy because he didn't know that Bolivia has salt flats.

She hates comedy, beaches and doesn't want children at her wedding. But the man she marries must have passions outside of work, good education, and should not be keen on either football or long, relaxing vacations.

Aparna, who doesn’t cook but has 50 pairs of shoes, is the ultimate nightmare of the matrimonial market and Mummyjis.

She is also, sometimes, rude. After meeting a guy suggested by Simaji, a perfectly decent gentlemen who seemed to be making an effort to connect with her, the word “loser” gets uttered.

The anger against her is understandable. But what is baffling is the free pass that has been given to Preetiji and certain men on the show who are decidedly creepy.

Like this one guy, Vinay, who disappears on this lovely girl, Nadia, after going out on seven dates. Or sulky Guru who arrives in a crumpled T-shirt and rejects Nadia because she drinks. Or the Delhi match-maker Gita who can’t stop talking about how it’s women’s duty to sacrifice for the man.

The Indian matrimonial market is huge. And it’s been dominated by boys and boys’ side, like, forever. What these girls are claiming is just a tiny sliver of that market, and they are following the exact same rules set and accepted for the boys. So why the rage?

Or, perhaps, thus, the rage.

Preetiji, who epitomises all that is wrong with the rather clinical arranged marriage set-up, but also one that has worked for generations, inadvertently puts it all in perspective with one stray remark.

In Udaipur to check out a girl her son seems to finally like, Preetiji asks her, "What are you looking for in a life partner?"

"Someone I can share my feelings with," replies the shy girl, with a tentative smile.

“Oh!” remarks Preeti. And then adds, without smiling, "Still looking."