The sisters had an enjoyable time with the international artiste, but we spotted an Akshay Kumar connection. 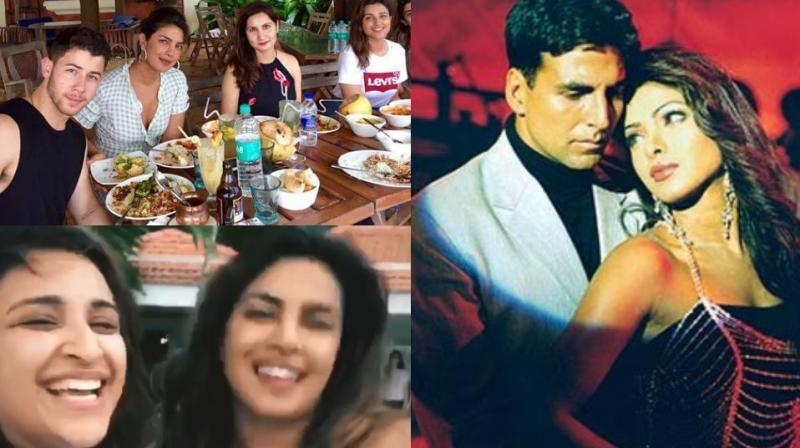 Priyanka Chopra and Nick Jonas are all over! After making headlines with their regular spotting on international shores, the couple is also grabbing eyeballs closer home.

The pair played hide-and-seek with the media on arrival in Mumbai, but then stepped out hand-in-hand for a dinner gathering, also with the actress’ mother Madhu Chopra.

Nick’s Instagram story, raving about ‘Her’ enjoying the rains, was termed as a ‘official’ tag on their relationship.

Fans worldwide have not got enough of the couple, but there are only a lucky few to get up, close and personal with them.

We are talking about Priyanka’s cousin Parineeti Chopra, who, along with Alia Bhatt, were among those invited for a get-together at the actress’ residence on Saturday.

She also joined the couple for a holiday in , with the trio being snapped at the airport on Sunday.

Parineet had posted about ‘A storm is coming’ from on her Instagram stories, but luckily there was none for the tourists.

The group only had light rains to tackle, or rather enjoy, as the sisters showcased in this video Parineeti posted on Twitter.

The cousins are seen singing and dancing jovially together in the rain in the selfie video.

While Parineeti’s caption, “Not a cheesy Chopra sister performance. Nope. @priyankachopra#DancingInTheRain” and their expressions were too good, what caught our attention was the song they are crooning.

‘Tip Tip Barsa Paani’ is one of the most obvious rain songs for any occasion, but the lead actor of the song, Akshay Kumar, does have quite a history with Priyanka.

Amid successful films like 'Mujhse Shaadi Karogi', ‘Aitraaz’, ‘Andaaz’ and ‘Waqt: The Race Against Time’, the duo were also reported to be in a relationship.

According to reports, Twinkle Khanna took charge of the situation following the affair, and they have not yet worked together since then.

This is just a song anyway!

Meanwhile, Parineeti is also set to work with Akshay for the first time in ‘Kesari.’

Nick surely missed the dance, but we do see him in the background dressed in black T-shirt and shorts.

And we also got out hands on the first picture of the couple and Parineeti from , enjoying a breezy lunch together.

priyanka with her friends, family and fans in GOA. #priyankachopra #parineetichopra #nickjonas

We wonder what’s next for the couple. Will they head to Mumbai, or go back to ? Paparazzi and fans would surely hope for the former.