Veteran actress talks about her Marathi debut, films like ‘Saajan’, ‘Beta’ and much more in an exclusive interview. 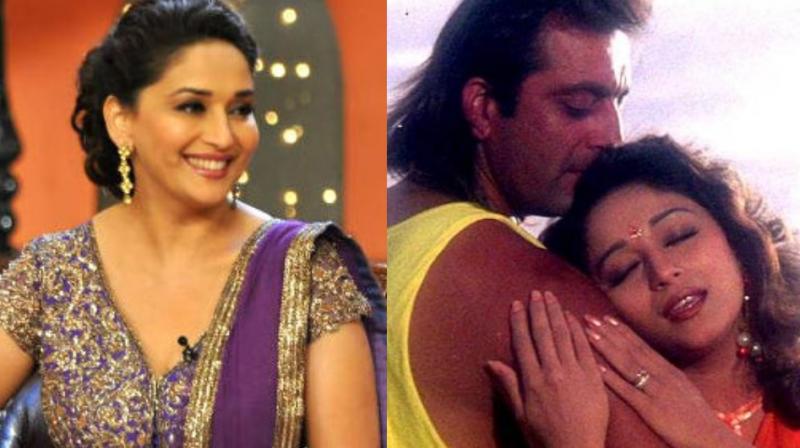 (Right) Madhuri Dixit in a still from 'Saajan.'

Mumbai: Madhuri Dixit-Nene is a name to reckon with in the Hindi Cinema industry. The actress was a rage not only during her first innings, but she gave a befitting reply to the critics who had written her off in the beginning of her second innings with ‘Aaja Nachle’ while she was asked ‘to pack her bags and go back.’ Since then, she went onto bag the prestigious award from the Government of India – Padma Shri.

‘Bucket List’, the debut Marathi film of Madhuri, is creating buzz in the filmy arena in both Bollywood and Marathi film industries.

The film is directed by Tejas  Prabha Vijay Deoskar who convinced her with a short narration.

”Yes, after hearing the short narration from Director Tejas I got convinced. Thereafter developing the entire script he came to be within six-seven weeks and here I feel am with this film which was indeed in my personal Bucket List as well,” says the actress in an exclusive interview.

What is ‘Bucket List’ and why did you chose it?

Actually, we women forget to fulfil our own wishes. Owing to our busy schedule after getting married, we get engrossed in looking after our in-laws… taking care of the husband and children. But in the film, something happens to me and thereafter I have certain wishes to be fulfilled. I start fulfilling those wishes from my ‘Bucket List.’ At this point in time, I understand my individuality. And I go ahead with what I want to do. There is a sense of humour as well entertainment in the film. Youth as well as grownups will also identify with the film.

When do you consider it’s your ‘real me’ time?

My real ‘Me time’? As I am an actress, my real ‘me time’ is when I am acting and bringing about a smile on the faces of my fans. Also when I am dancing, I feel on the seventh heaven. Also I enjoy doing all this along with my husband and family… when they are a part of my real ‘me time’ I do feel contented.

Do you still go shopping in any Mumbai mall with your children?

Oh! Nowadays my children… bachche mere sath aate hi nahi hai (They do not come along with me mostly.) I have two sons so they have grown independent. Even if sometimes I go to leave them to their school they will ask me to drop them at a particular point only… ‘Mom bus wahi tak aana aap!’”

Since you belonging to those times, you have enacted varied characters throughout your career.

I have always lived on my terms. I got married when I wanted to get married. I decided to have kids, and so I went ahead with it. I also feel happy that I am blessed that the almighty God has always given me a fulfilling and a fruitful day in my journey, be it personal or professional. Directors/producers offered me varied roles, so I am thankful and feel blessed.

Reminiscing about your two important films ‘Beta’ and ‘Saajan’, would you like to relate some happenings that may have occurred during the shoot of these films?

Film ‘Beta’ –The exchange between me and Aruna Iraniiji was so powerful and challenging that we two enjoyed performing every scene. Then I would always tell Arunaji that being such a powerful actor, you have not yet got your due. She had done brilliant films like ‘Caravan' and ‘Bombay to Goa'. The ‘Tashn' of Saas- Bahu was performed so powerfully by Arunaji that it gave me the boost to be equally challenged. Whenever film ‘Beta’ is watched by the audiences, they enjoy the film even today.

Film ‘Saajan’– After the people from tinseltown came to know that Sanjay Dutt  was going to perform that character, they were heard discussing like ‘He is an action actor. Will this story be a hit?’ But when the film released, the drama, emotion and thrill in the film entertained the audiences and the chartbusting music ensured the film was a huge success at the box office.

Learnings from ‘Saajan’: My learnings from that film were great. I learned that we need to break from getting stereotyped. From then onwards, I looked forward to perform varied characters.

Who was your strength in the beginning of your career?

My mother is that person who proved to be my strongest pillar in life. She always taught me how to be grounded and remain calm. How I needed to behave when my films proved to be a hit and not to let success get into my head. She would always say, ‘You need to deal with your lows as well.’ She also taught me how to deal with the rejections and the lows. It is only because of her teachings I could achieve all my dreams today. Also she taught me to always be true to myself. I feel complete as a woman because all my dreams have been fulfilled. Marriage was also one of my dreams.

So you did not miss the cameras while in the US?

Not at all. Marriage was my decision. I was very happy we are three children and marriage is always there on the mind. After the children were born, I turned so busy that I had no time to think about films etc. I enjoyed nurturing my children and also motherhood. After finishing all my duties towards the family along with them, I am enjoying my professional commitments now. Thus I feel fully satisfied and blessed.

On a concluding note, about her two sons, she says, “Well! It is too early to guess what profession they might choose. Both my sons love the piano and are learning it as well. The younger one’s interests are reading about science as a subject and anything connected to science interests him. The elder one loves historical stuff. Well! We will know about their professional plans in the near future.”