Hauli Hauli’s catchy beats will certainly compel you to rock the dance floor. 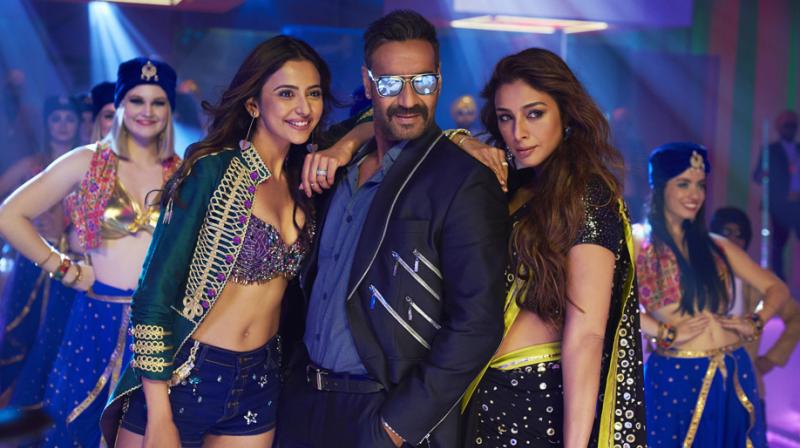 Ajay Devgn, Rakul Preet and Tabu in the still from Hauli Hauli song.

Mumbai: After mesmerizing the audience with a series of upbeat songs, the makers of De De Pyaar De have now released another smashing track – ‘Hauli Hauli,’ which will make your feet go tapping for sure.

A recreation of Garry Sandhu’s popular Punjabi number – ‘Yeah Baby’, the electrifying beats of ‘Hauli Hauli’, composed by the master of foot-tapping recreations – Tanishk Bagchi, takes the song to another high.

Talking about the song, Tanishk Bagchi said, “Garry is a champ and his ‘Yeah Baby’ is a smashing song. Recreating an already popular song is always a challenge, but I take it positively. I try my best to keep the original feel and vibe of the song intact, while at the same time giving it a fresh treatment and arrangement. I think ‘Hauli Hauli’ is all set to fuel up the dance floors.” Tanishk further added, “Akiv Ali has done a fantastic job with De De Pyar De. The trailer hitting a 50 Million on YouTube is proof what dynamite of a film it’s going to be.”

Penned by Garry Sandhu and Mellow D, the peppy song is crooned by Neha Kakkar and Garry Sandhu. Picturized on Ajay Devgn, Rakul Preet Singh and Tabu, the up-tempo song thrives on their infectious energy and wonderfully captures the zestful mood of the film.

Choreographer Bosco Martis said, “Hauli Hauli is a pure party number and it was a lot of fun choreographing it. As it is a promotional track and features many of the film actors apart from Ajay sir, Tabu ma'am and Rakul, so I had to ensure that the hook steps were simple, catchy and looks good on all the actors. Once that part was cracked, it was a smooth sail for me. I must say, I really enjoyed working with all the actors. We had a great time dancing on the song.”

Speaking about the track, director Akiv Ali said, “We wanted to shoot a promotional track that was not only a fun, foot-tapping number but also resonated with the mood of the film. I personally like Garry Sandhu’s ‘Yeah Baby’ very much, and all of us knew this was an apt song for our promotional track. Tanishk has done a fantastic job and I hope this fun number that we all have loved so much finds a place on everyone’s playlist.”

Hauli Hauli’s catchy beats will certainly compel you to rock the dance floor.