The latest reports suggest her death happened because the actress drowned in a bathtub. 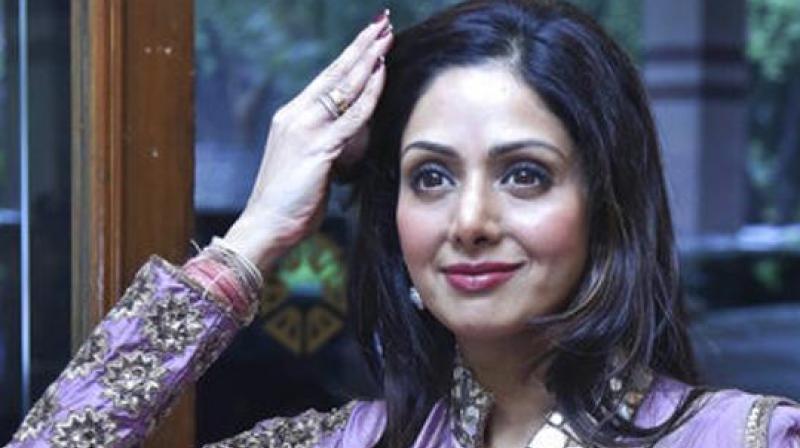 Sridevi snapped outside a venue.

Mumbai: Sridevi breathed her last on Sunday morning, where she was in Dubai after attending her nephew Mohit Marwah’s wedding there.

The latest reports suggest her death happened because the actress drowned in a bathtub.

Bollywood celebrities mourned her death, while some others, like Hrithik Roshan and Rishi Kapoor, shared some fond memories of her.

“Initially, I thought maybe she’s snooty or simply arrogant to not speak to her co-stars”, Rishi told Mumbai Mirror.

He added, “Later, I found out that she was actually shy and maybe, a tad conscious about speaking in Hindi or English, because she was not proficient in either of the languages back then. In fact, she told me about it much later.”

“Today, I feel terrible for her lovely daughters. I will miss my ‘Chandni’ for all the lovely cinematic moments she gave me. Her fans will miss her. No one will entertain the way she did. I don’t see another female actor achieving what Sridevi did in any sphere of life,” said the actor.

Hrithik Roshan, who gave his first shot with Sridevi, wrote on Instagram, “I loved her, admired her so much. My first ever acting shot was with Sri Devi, I was nervous in front of her and I remember her shaking her hands pretending to be nervous cause of me, just to boost my confidence. We had to laugh, and she kept laughing until I got it right. Will miss you mam.”

Juhi Chawla also remembered how both she and Sridevi had the same daughter name Janhvi. On her twitter page, Juhi wrote:

Can’t believe this .. I just woke up and heard the news !!! It’s sad and terribly shocking !! I’ve always been such a fan of Sriji !! How fragile is this life we take for granted !! 😣😣😣

“I shared a special bond with Sridevi - while our love for acting bound us, it was our role as mothers that brought us together. It was 2002; her husband Boney Kapoor was launching my daughter Esha in Bollywood. While I was a nervous mother, anxious to see my daughter set foot in Bollywood, Sridevi was an expectant mother, pregnant with her second daughter Khushi. Understanding my anxiety about Esha's debut, she would often drop in on the set to see my little girl. It was during this time that we got really close,” Hema Malini told Mid-Day.

“Today [February 25] marked the 35th anniversary of the film's release and it's tragic how she passed away just a day before... I was terribly shocked when I heard about her demise,” mentioned Jeetendra to the daily.

“When she agreed to be part of my first directorial venture, ‘Roop Ki Rani Choron Ka Raja’ (1993), I considered it an honour, because, at that time, she was a top star. I remember, for the track, ‘Dushman Dil Ka Jo Hai Mere’, choreographed by Saroj Khan, she had to descend a flight of stairs while staying in character. And she did it without even glancing at the steps. It was commendable. Amitabh Bachchan had sent her a truck full of flowers, and a note of appreciation after seeing the scene. He wondered how she managed to descend the stairs to the tune so smoothly. In fact, he even tried to do so at home, but was unable to get past a few steps,” Satish Kaushik reminiscised.

“I have been trying all morning to gather myself to face the truth of dear #sridevi leaving us,trying to believe it’s  just a bad dream/memories of her just keep coming back and I don’t know whether to smile or cry. We love you dear Sridevi #RIPSridevi,” wrote Nagarjuna.

“Heartbroken ! Last met her at MAMI and the Antilla party that followed. Stunning as ever, this is how I first met #Sridevi Ma’am #RIP,” wrote Dulquer.

Her fans in Pakistan, who also worked in at least one Hindi film, also sent condolences to them.

Adnan Siddiqui, who played her husband in ‘Mom’, said, “Life is so unpredictable. A lady with not just extreme talent but also a beautiful soul, Sri Devi Kapoor leaves us heavy hearted. So many memories attached while shooting 'Mom' with her, just a couple days back I met her at Boney Kapoor's nephew's wedding and who would have thought that it is the last time I'm seeing her. I'm still in a state of shock and out of words to describe my feeling! May her soul rest in eternal peace hereafter.”

Sajal Ali, the daughter in the same film, wrote on Instagram, “Lost my mom again...”

Mahira Khan, who made her debut with Shah Rukh Khan in ‘Raees’, tweeted, “So grateful to have grown up and lived in the times of #Sridevi. Thank you for the movies, thank you for the magic. You shall live on forever..”

Ali Zafar, a Pakistani singer who has also worked in Bollywood films like ‘London, Paris, New York’ and ‘Mere Brother Ki Dulhan’, tweeted, “Rest in peace #Sridevi ji. You have left us with great memories of joy and tears.”

Imran Abbas, a part of Bipasha Basu’s ‘Creature’, wrote, “The "SADMA" of losing this ultimate superstar is heart wrenching. Her smile, beauty, acting, aura and those "NIGAAHAIN" will be missed forever.”

Hollywood actor Orlando Bloom too was fond of the actress. “Have you really done 300 films? How have you managed to do that,” Orlando Bloom greeted Sridevi instead of ‘hello’ when he was introduced to her by Amar Singh. As a response to that, Sridevi only smiled.

In a conversation with Mumbai Mirror, Raveena Tandon recollected the moment when Sridevi was stuck on the same dialogue that gave trouble to Divya Bharti.

The actress said, “The first shot was an emotional one for us because Sridevi had stepped into Divya Bharti’s shoes after her untimely demise. Divya, Shakti Kapoor and I had shot a scene in Aurangabad where she fires us and throws us out of the office. While shooting the scene, Divya was constantly getting stuck on a particular line of dialogue and had to give several retakes before it was okay.”

“Around six months later, we were shooting the same scene with Sridevi in the same office and it was so eerie because she was stuck on the same line. All of us on the set had gooseflesh and Shaktiji (Shakti Kapoor) suggested we all chant the Gayatri mantra aloud. I held Sridevi’s hand as we said the prayers, then we broke a coconut and resumed shooting,” she further said.

The saddest part was that she couldn't see her daughter (Jhanvi)'s debut film. My heart goes to entire family. I don't have much info about news of her drowning. I heard she fell into bathtub following a cardiac arrest. I am very sad: Shakti Kapoor #Sridevi pic.twitter.com/zxWKEJo2tN