Watch: Akshay will tug at your patriotic heartstrings with gripping Gold trailer

We see Akshay as an aggressive and patriotic Bengali man creating and setting up a hockey team to complete for gold medal. 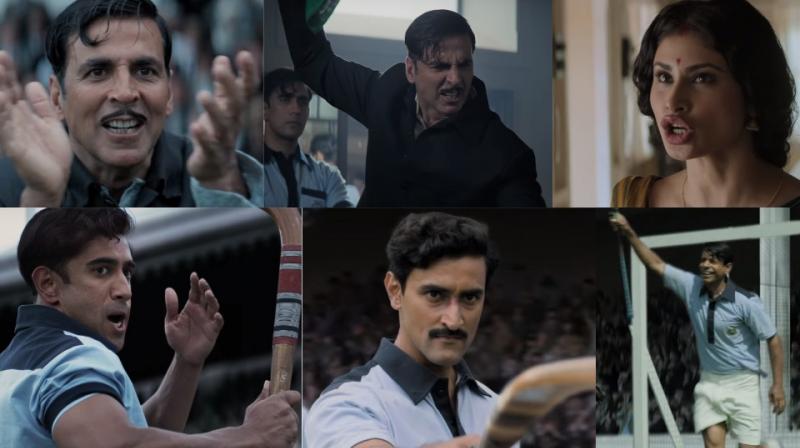 Mumbai: After playing a naval officer in ‘Rustom’, and raising important causes in films like ‘Toilet: Ek Prem Katha’ and ‘Padman’, Akshay Kumar aka Bharat Kumar is back with another film on similar lines, ‘Gold.’

The trailer of the film was released on Monday, and we see Akshay as an aggressive and patriotic Bengali man creating and setting up a hockey team to complete for gold medal at the London Olympics, 1948.

India won the gold at the previous two Olympics in 1932 and 1936 as well, but why is Akshay’s character overenthusiastic for this competition taking place after a 12-year gap due to World War II?

The two gold medals were won when India was under the British rule and referred to as British India, almost as if to remind them that, ‘you are not free.’

He intends to take revenge of 200 years of British rule by beating them in front of their people, but his wife Mouni Roy feels the ‘dreamer is still lying in the gutter.’

He assembles his army of players, Kunal Kapoor, Amit Sadh, Vineet Kumar Singh and Sunny Kaushal, who mouth punch lines like ‘passing dreams like passing the hockey ball’, ‘family announced me centre forward on my birth’, ‘Inquilaab Zindabad happens before breakfast at home.’

Later the team crumbles as they fight in the freedom struggle, and the story is about how Akshay gets them back together to win gold for the country.

Akshay looks truly the Bengali with his accent, dialogue delivery and overall look, while the actor actors also look convincing.

Earlier, Akshay’s character was reported to be based on Balbir Singh’s character, but the makers clarified that it a fictional story revolving around a real story.

However, the film will remind you of multiple films.

Shah Rukh Khan’s ‘Chak De! India’ might be the first one, as this is also about a man who inspires a hockey team for a world competition.

The other is Aamir Khan’s ‘Dangal’ which was about the story of a father’s obsession for a gold medal for the country.

‘Gold’ is written and directed by Reema Kagti and produced by Farhan Akhtar and Ritesh Sidhwani’s Excel Entertainment.