Priyanka Chopra trolled after her visit to Rohingya camps

However, seems like all didn’t turn out the way the former Miss World wanted it to. 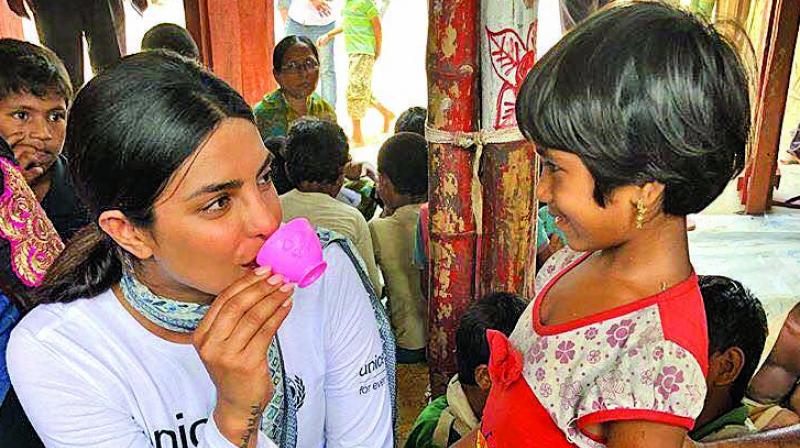 Priyanka Chopra, who is also the Goodwill Ambassador of United Nations Children’s Emergency Fund’s (UNICEF) for child rights apart from an actress, visited the Rohingya refugee camps in Bangladesh’s Cox’s Bazaar — one of the largest refugee camps in the world. The Quantico star shared many pictures from her visit on her social media and even asked her fans to support children who have no future in sight.

However, seems like all didn’t turn out the way the former Miss World wanted it to. Priyanka was, in fact, mercilessly trolled for visiting the Rohingya camps. One of the Twitter users, Ahmed Raza(@KingAhmedRaza) wrote, “This visit should be aimed at helping refugees and not just a selfie stunt (sic).” While another user, Shivam Srivastava (@shivam_D12), tweeted, “Another ‘Useful Idiot’ working for a elite-nexus, who turn BLIND-EYE TO GAZA, SYRIA. where worst killing happened few days back, since 2014 (sic).”

srinivasam (@subramaniumsri): Remember you doesn’t represent 1.2 billion people sentiments. If you have no sympathy for indians then give your land and money to rohingyas and settle in Bangladesh permanently. From now onwards no more your movies for me and my family. Shame shame not expected from you.

Somit Gope (@imSomit): Sorry for saying big thing.. but I just want to ask .. we have d same problem in India , forget India .. in Mumbai itself how many time did u visit n went there n thing about their problem n needs ???  Will appriciate if spare some time also at least nearby of our places. Thanks