After refraining from the theme all along, Bollywood is finally gearing up for three films revolving around the theme of outer space. 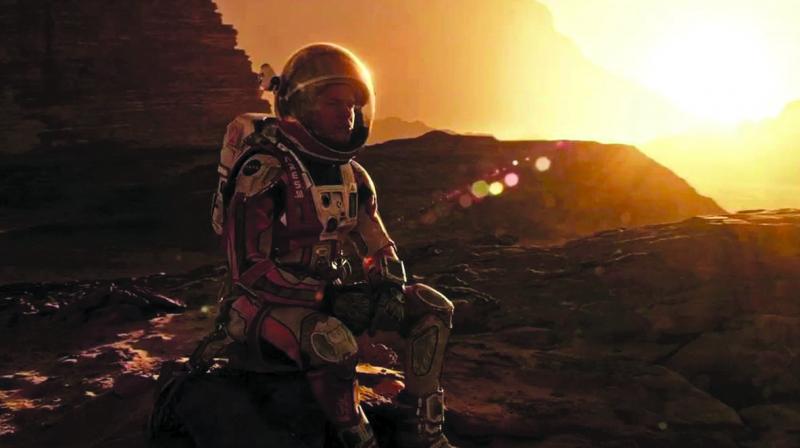 A still from Martian.

India’s fascination with the space is centuries old, with astronomy and astrology being prominent parts of our history. With ISRO having launched a record 104 satellites into space at the same time this month, this age-old fascination has found a brand new impetus in the minds of Indians.

So how can Bollywood be too far behind in this latest craze? With the industry only seeing sporadic science-fiction movies, and nearly none based on the outer space, the Hindi film business is seeing not one, but three ‘out of the world’ movies set to go on the floors this year.

One of the most anticipated science-fiction movies, Chanda Mama Door Ke, is set to star hot property Sushant Singh Rajput in the lead role and the actor has reportedly started preparing for his role as an astronaut already. Having taken flight simulation lessons already, Sushant has spoken about being inspired by Neil Armstrong and Buzz Aldrin’s journey to the moon aboard Apollo 11. “I’d always wondered how Armstrong, Buzz & Michael were feeling during those 9 days to the Moon. Well, now I know,” he said.

The movie’s director, Sanjay Puran Singh says he’s glad science fiction movies are finding more takers, and that filmmakers are actually willing to put their money on them. “There was a time when Indian producers were not ready to back sci-fi movies. But now I’m glad that more filmmakers are exploring this genre and producers are ready to take that risk.

Pritish Chakraborty, the director of the upcoming Mangal Ho, an upcoming sci-fi comedy movie, points out that a lot of patriotic movies have come up in the recent past. “Our Prime Minister, Narendra Modi’s Make in India initiative seems to have definitely sparked the patriotic side of our filmmakers and movies like Airlift came up. Such initiatives popularise India on international platforms, but we plan to go beyond it and popularise India on not just a global level but an out-of the-world one — Mars!” he smiles, as he talks about his movie, which will showcase the journey of the first Indians on Mars. “There have been very few Indian movies that have tried to showcase the space, and ours is to be one of the talk about sending people to Mars. I hope our concept will bring more attention to India and its achievements in space.”

Annu Kapoor, who stars as an eccentric scientist in the movie puts the sudden spurt of science-fiction movies down to simple business for financers. “It’s an expansion of business,” shrugs the veteran actor. “It’s a good thing, and the current scenario is only getting better. This industry is no longer just about boys and girls dancing around the trees, and it’s now time to grow up. It’s high time Bollywood start making something new and grow the business.”

Adding to Annu’s statement is the fact that Bollywood heavyweights are throwing their support behind this movie. Besides science-fiction flicks, a movie that has the industry taking notice already is Aamir Khan’s biopic on Indian astronaut Rakesh Sharma. Besides the perfectionist actor getting on board with the movie that will understandably show the outer space, it has the backing of Siddharth Roy Kapur and will be produced under the RK banner.

“There is naturally a lot of money in the market for filmmaking,” continues Annu about the industry. “There’s always enough money to produce films. It’s good, and we should set a trend. It’s a good time to invest money in such projects.”

With Bollywood taking baby steps towards science fiction, is it long before we get our own Gravity? Filmmaker Vivek Agnihotri is sceptical about the genre taking off in the country anytime soon. “In order to make a film like Gravity, it will take us a 100 years,” he exclaims. “Look, I’m not undermining our talent, but our society is not united cinematically. In the US, with English being the dominant language, the movies connect worldwide. We have so many languages, we don’t have one that connects to everyone. We don’t get the kind of revenues because we don’t have that kind of footfalls.”