When gimmicks went off the rails

A source close to the Raees team maintains that his death was not directly caused by the stampede. 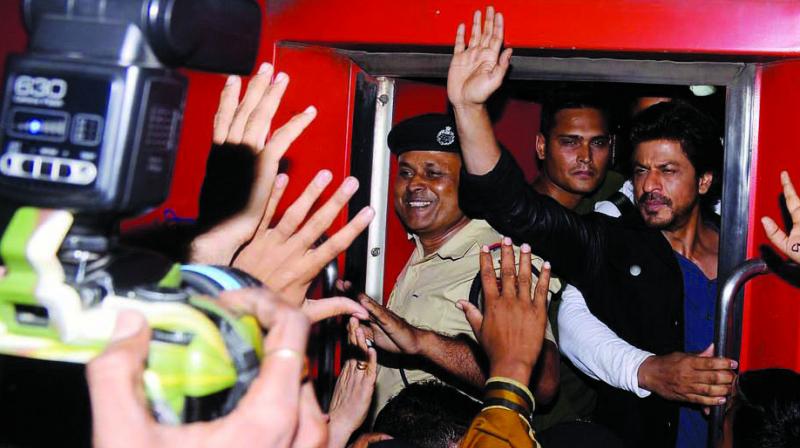 Shah Rukh Khan during his train journey for promotions of 'Raees'.

One person died and dozens were injured at Vadodara Junction railway station on Monday night, when fans of Bollywood star Shah Rukh Khan rushed to the station to catch a glimpse of him, as the actor was travelling on a train to promote his upcoming film Raees.

The actor had boarded the August Kranti Rajdhani express at Mumbai earlier in the day, heading to Delhi, and at a stop in Vadodara, unruly fans led to police resorting to mild lathi charge to try and disperse the crowd. In the midst of the chaos, a local politician Fareed Khan Pathan suffered a cardiac arrest and died.

Shah Rukh put out this statement on Tuesday morning, “We started the journey thinking we all will travel, spend time with each other when one of your own loses someone one trip like this, it saddens us all... It was really unfortunate... On behalf of everyone, our prayers and blessings with the whole family.” (sic)

However, the fact that the organisers didn’t account for the very likely possibility of mobbing fans has people raising the issue of how the incident was not just avoidable, but the promotion stunt completely unnecessary.

Varun Gupta, founder of Trigger Happy Entertainment (that worked on the publicity for Dharma films such as Student of the Year and Baar Baar Dekho) says, “I feel that a promotion activity for a film should be related to its content — Dishoom for instance had action and stunt-related acts. What is Raees’ association with trains? Besides, Ranbir and Deepika had done it for Tamasha already, so there’s no novelty here.”

Varun adds, “I also believe that big stars like Shah Rukh and Salman don’t need extensive promotions — they get the numbers anyway. It’s the newcomers who need it. We had done extensive promotions for Student of the Year since Varun, Sidharth and Alia were new at the time. In films such as Raees, content is the king apart from the major attraction that is the superstar actor.”

Shailesh Giri, Bollywood publicist, says that chaos created at the event could have been controlled and averted. “Railway stations are extremely sensitive platforms and one must hold promotional events at such public spaces with utmost care. I think Shah Rukh Khan and his team should not have been given permission for this event. Apart from the person who lost his life, there must be several others who must have missed their trains and their tickets gone waste.”

Recalling the promotional event for Abbas and Mustan Burmawalla’s Players, which they were supposed to organise in Delhi Metro, he says, “We booked the Airport Express Line, which is comparatively less crowded. We booked the entire train for the event and allowed only media to enter. The artistes were picked and dropped at particular stations, and the public was prohibited from entering the station premises.”

Talking about crisis management, Bollywood publicist Dale Bhagwagar, says that the ‘when’, ‘what’, ‘how’ and ‘where’ are not as important as the ‘why’ of an event.  “The ‘when’ here tells us that this event happened when the star had left the venue... after the train departed the station. Also, his team would definitely have acquired police permission to carry out such a promotional event, so ‘that’ is out of the question. As for the ‘how’ did it happen, you can contemplate on whether the star had provoked the fans, crowd, etc., which in this case did not happen. Had it been his provocation, then the story would have been completely different. Coming to ‘where’ — it happened at a railway station, a public platform where the police should have paid extra caution. You can’t blame the stars.”

Arun Kunal, a Delhi-based Bollywood publicist, says, “In Delhi, permission is sought from both Delhi police and Traffic police, whether the event is a film promotion or a sports event and whether it is taking place in a metro rail or a college. I remember there was a wrestling event planned in Gurgaon where the Great Khali was supposed to come and he didn’t show up and the crowd went berserk and started breaking things. The best we could do was get the models and other wrestlers out safely with the help of our bouncers. I have noticed that in every celebrity event, the cops are more concerned about the star and bother little about crowd management. The cops are equally awed to find a big star in their midst and keep looking at them.”

Nandini Viswanathan, Media Director, Naarad PR & Image Strategists, shares, “Every actor thrives on the love and adulation of his fans. Promotions nowadays are designed in a manner for the actors to get close to their fans. It is but inevitable that at times, fans come too close. The actor’s security team always does a recce and ensures a quick exit of the actor so as to put an end to pandemonium. The security is specially instructed to not push or shove any fan. A simple human cordon is formed to enable the star to make a quick exit. In SRK’s case, he even ensures that he waves to his fans and let love prevail over mob sentiment. We have personally experienced it. In the current case, it was the cardiac arrest of a member of the family of the journalist fraternity. It was not a death in a stampede, but yes it was unfortunate and God’s will. Keeping the above incident aside, the fact is that novel promotions attract both media and the masses. And it is the age of innovation. One needs to constantly reinvent himself to stay in the race.”

The trend of over the top promotions itself is harmful, says director Sajid Khan. “We have seen not-so-successful films translate into bad box-office collections and even big names like Shah Rukh and Aamir haven’t been able to save the films  — take Fan and Talaash for instance. With Raees, the trailer worked and all they had to do was build on that excitement. If the trailer had failed, then the team would have to try salvaging the film from day one, but then again because it is pitted against another huge film like Kaabil, they did what they had to.”