Entertainment   Bollywood  24 Aug 2018  This is how Anushka learnt embroidery for Sui Dhaaga: Made in India, watch video
Entertainment, Bollywood

This is how Anushka learnt embroidery for Sui Dhaaga: Made in India, watch video

The actress went an extra mile and took two months of training before the shooting of the film began. 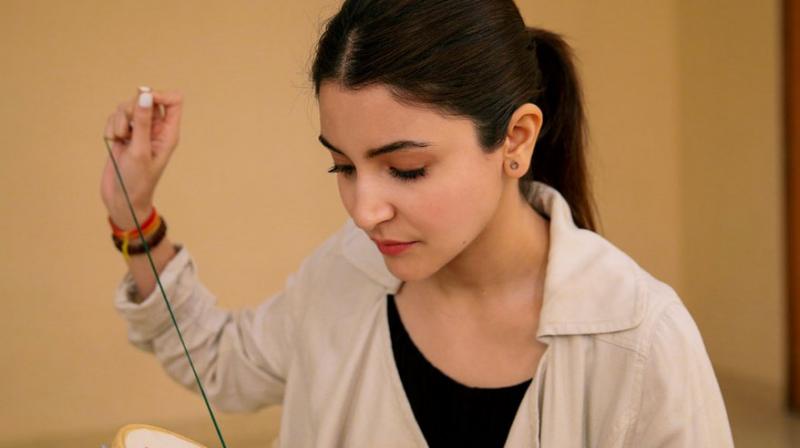 Anushka Sharma learning embroidery for Sui Dhaaga: Made In India.

Mumbai: Anushka Sharma, who is excited to play a role of small town woman in 'Sui Dhaaga', learned embroidery by professionals for three months to bring fineness to her character.

Anushka will be sharing screen space for the first time with Varun Dhawan. She will be seen playing the role of Varun's wife, and an embroidery artist named Mamta. The 'Sultan' actress went an extra mile and took two months of training before the shooting of the film began. Familiar with the basics of stitching, the actress revealed that she was trained for the basics during her school days. Yash Raj Films has released a 'Behind-The-Scene' video of the same.

Check out the clip here:

Anushka has surely given her 100 per cent to this challenging role and that is also quite evident from the trailer of the film.

Expressing her joy to be a part of such film, Anushka had earlier said, "I always get excited with unique ideas that have human interest stories. Sui Dhaaga is a story of self-reliance that I believe will connect to the grassroots level with every Indian. And am really looking forward to work with Varun Dhawan and the team of Maneesh Sharma and Sharat Katariya."

The film is slated to release on September 28.