Everyone sitting here has contributed equally to the film and all are heroes and heroines. 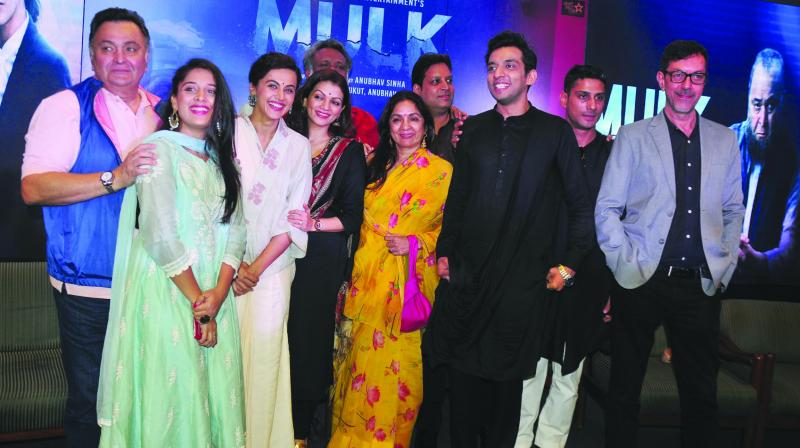 Cast of the film Mulk

Directed by Anubhav Sinha, the film Mulk revolving around a Muslim family trying to reclaim its lost honour has been courting controversy. “The day the trailer released I got a number of calls. It was very encouraging for me and the digital team got a very good response.

However, I went on Youtube to read the comments and got a lot of negative response — with some saying things like the money for the movie came from the mafia, to justify the Muslims, to justify global terrorism, and things like that. This was very disturbing as a lot of people abused and threatened me severely with their comments and the troll brigade started with threats,” says Anubhav Sinha.

Taapsee Pannu also shared an experience, “One morning I saw a news debate that went on for two hours on the topic of lynching and took all details into consideration and looked at it from all angles. I couldn’t eat my breakfast, I just wanted to puke. I didn’t like what I saw and that is why I did this movie.”

Rajat Kapoor agreed and shared, “I feel it is a very sad thing to know that 9% of people in India thinks that those who eat beef should be lynched. Where are we living? You’re talking about politics and all, whilst I feel, who cares! The problem is that it is in people’s minds and  that is scary.”

A visibly emotional Rishi Kapoor spoke about what motivated him to sign this movie, and said, “What is motivation? I liked the story and the script and thought it will be enjoyable to play this character. When he told me the story I took it as a challenge.”

Talking about the divide between Hindus and Muslims and if it actually exists, he said, “First of all, it is not about two families, it is about one joint family. I play the role of a patriot and I feel to make any movie some cinematic liberty is taken. Otherwise you can make a documentary or show something on television for free, like what is entertainment tax there for? When there is no entertainment then why does the tax exist? We make fascinating movies for people, which they can find interesting. Nowhere in the movie are we giving a solution to this, as we don’t know ourselves. We all keep talking about this divide, saying it is prevalent in our society but we just don’t know the answer! So this is what the movie is about.”

He further added, “The film is not about a hero and a heroine, or a comedian or a villain, it has an ensemble cast. Everyone sitting here has contributed equally to the film and all are heroes and heroines. We are all equally responsible for the film,” he adds.

“I feel we should promote brotherhood. Mulk is not only a movie about a country, it is about two communities. Mulk means conscious people. All these riots, caste systems etc. have been there before I was born and my father used to make films on  them. So this has been going on and will go on. People need to be literate and understand the importance of unity. I feel blessed that I took birth at a time when China and Russia stopped communism, also in South Africa apartheid was demolished. I also saw the East and West wall in Berlin and how Germany was finally unified. I also saw North Korea was in talks with the USA, but our situation has still not been resolved! The India and Pakistan problem needs to be solved together. The world is solving their problems and we are not doing anything about ours,” he fumes.

On a lighter note, Prateik Babbar  says, “Working with the team of Mulk was a great learning experience for me. I cherish every moment of working with these stars and I loved the experience.”