The veteran actor didn't mince words and blamed the director and the music composer Pritam for the failure. 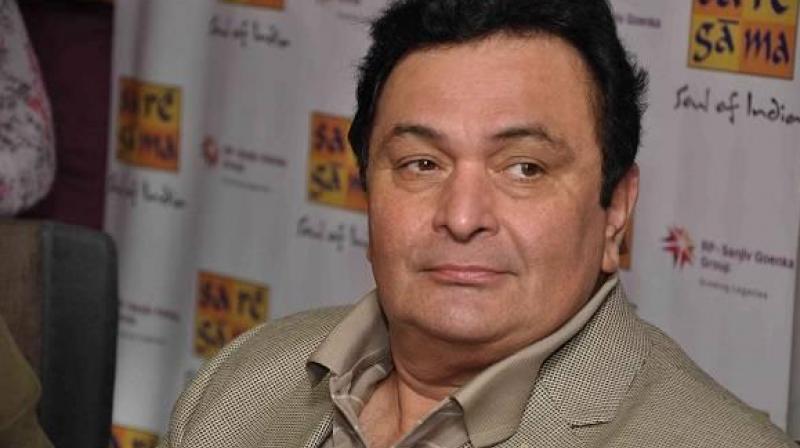 Rishi Kapoor will next be seen in a film opposite Amitabh Bachchan.

Mumbai: Be it the beef ban in Maharashtra or Bollywood stars not attending funerals for lack of air-conditioners, Rishi Kapoor has been extremely blunt and straightforward with his opinions.

The veteran actor didn’t mince words again, after his son Ranbir’s ‘Jagga Jasoos’ bombed at the box office recently, and slammed the director of the film Anurag Basu and music director Pritam for causing delays. The film had been in the making since the past 3-4 years and Ranbir's relationship with his co-star and ex-girlfriend Katrina Kaif was often cited as a reason for the delay in the film. However, if you go by what Rishi Kapoor has to say, that is far from the truth.

Refuting reports that he was upset with Ranbir for doing the film, Rishi Kapoor told mid-day, “Honestly, Neetu (Kapoor) and I saw the film on Thursday, only a day ahead of the release. Till Wednesday, Anurag Basu was still mixing the film. Can you imagine that? Pritam probably delivered the music only a week before. What can you say? You don't take an opinion from anybody. Today's filmmakers are doing this with everybody. They don't show their films before release to take opinions, and treat it as though they're making a nuclear bomb. I didn't hate or love the film. I only felt it needed to be abridged by 20 minutes. But who is going to give that opinion to them? I totally agree with Ekta (Kapoor) when she threw him out from her film. He had problems with Rakesh Roshan while working on 'Kites'. He's such an irresponsible director that he doesn't complete the film. It was supposed to release three times in the past two years, but it kept getting delayed.”

His comments are justified considering the fact that Ranbir was not just an actor but also made his debut as a producer and is now staring at substantial losses after the film's debacle.

“Sometimes, Ranbir's films do well, sometimes, they don't. But here, Ranbir is the producer too, and his neck is in the noose. Who the hell are you to do all this? It is ridiculous that a producer hadn't seen his product a day ahead of the film's release. You may be the biggest director in the world, but nobody would like to work with you because you are irresponsible. There is somebody else's money involved in this. I trusted you, and this is what you give us? Ranbir hasn't held back on spending money on it. You even threw Govinda out of the film. If you don't want Govinda to work in your film, why did you ask him in the first place? With these developments, it's Ranbir and my name that's gathered negative limelight."

The overseas markets also contribute in a significant way, but the film suffered in that respect as it didn’t release in various potential markets.

“It did not release in Singapore because you have to deliver it five days in advance. It did not release in the Gulf on Thursday because it was only delivered to them on Thursday. This is unreasonable and irresponsible. You may be thinking you are making the Taj Mahal, but you are supposed to make it ready on time. Even Pritam delays his submissions. (It was later promoted as) a kids' film. But, a kids' film also has to release at the right time, like during the school vacations. At that time too, Anurag Basu wasn't ready. There's economics and maths involved. Everything is not just about creativity,” he added.

Kapoor added that these comments should not be construed as his interference in Ranbir's work, but his only issue was about Anurag not screening the film to get feedback.

"I do not interfere in Ranbir Kapoor's work at all. Here too, I'm bringing this up since you asked me about it now. I got to know that Ranbir was pouring in money like crazy in this. I don't interfere in Ranbir's career and I do not get to know anything either. I would like to add here that I am grateful to Anurag for giving Ranbir a lovely film like Barfi! But why hide a film? All big filmmakers, including my father (Raj Kapoor), Rakesh Roshan and Aamir Khan show their films, so why can't you?"

'Jagga Jasoos' is close to earning Rs 50 crores at the domestic box office after its 10-day run.