The yellow saree that Raveena wore in the dance number as she grooved in the rain with Akshay will forever be etched in our hearts! 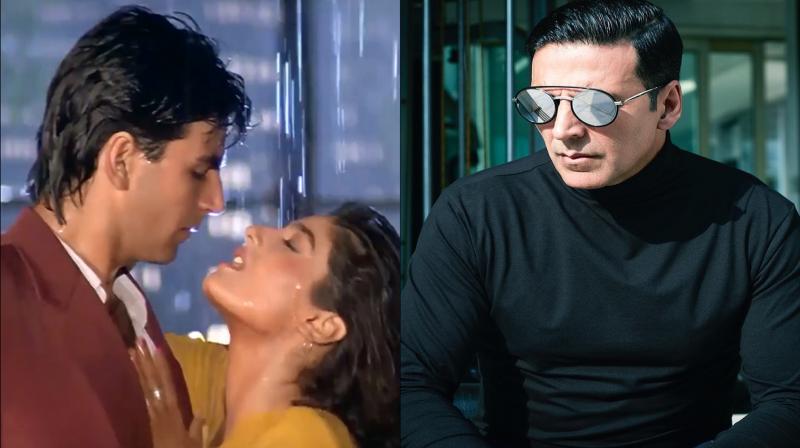 New Delhi: 'Tip Tip Barsa Paani' from 'Mohra' featuring Akshay Kumar and Raveena Tandon holds a special place in the heart of every 90s kid. Known for its sensuous dance moves, romantic lyrics and catchy beats, the track is surely a delight to watch even today.

The yellow saree that Raveena wore in the dance number as she grooved in the rain with Akshay will forever be etched in our hearts! The 'Kesari' actor recently took to his Twitter handle to announce that he is all set to recreate the iconic song. However, fans were not pleased to see his tweet and were quick to point out that the real star of the song was Raveena and her sizzling dance moves which got no mention in Akshay's post.

Many people trolled the 'Baby' actor for calling it a song that defined his career without giving Raveena the due credit for the track. "Akki we love you but for once don't forget to give the due credit to Raveena. The song was a hit not just because of you. Also I was not a huge fan of Raveena but Katrina can never recreate what she did," one user tweeted.

Another fan wrote, "Sir with due respect, no one remembers that you were also there in that song."

"oh, you were the male lead in that song? thanks for letting me know that.. all I can remember about #TipTipBarsaPaani is Raveena, Yellow Saree and the rain.. which movie it was bdw??," an upset user tweeted. 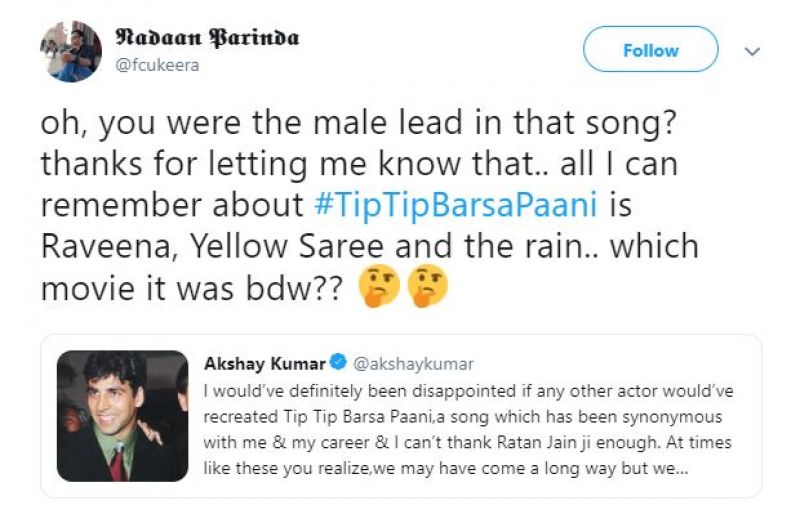 "You were good. But no one can replace @TandonRaveena in a yellow saree," another fan wrote.

Many other users expressed their disappointment with Raveena not receiving the due credit for the iconic song.

The 51-year-old actor got embroiled in a social media fiasco after his tweet on the romantic number.
On June 20, the actor shared a throwback picture featuring himself with Ratan Jain and wrote, "I would've definitely been disappointed if any other actor would've recreated Tip Tip Barsa Paani, a song which has been synonymous with me & my career & I can't thank Ratan Jain ji enough. At times like these you realize, we may have come a long way but we also go back a long way."

For the unversed, Raveena was the main focus in the hit song. 'Mohra' also featured Naseeruddin Shah and Suniel Shetty in pivotal roles. Reportedly, the number will be reprised featuring Akshay and Katrina Kaif for Rohit Shetty directorial 'Sooryavanshi'.

'Sooryavanshi' is scheduled to hit the screens on March 27, 2020. This is the first time that Akshay has collaborated with Rohit for a project. After the success of 'Simmba' and 'Singham', Rohit has expanded his cop universe with 'Sooryavanshi'. Akshay's entry was teased in the climax of 'Simmba' as an Anti-Terror Squad chief.

In March, the makers of the film shared the first look of the film. In the poster, Akshay was seen donning the garb of a police officer with a revolver in his hand.