After the woman-oriented film ‘Padmaavat’ finally gets its release, here’s another reason to celebrate. 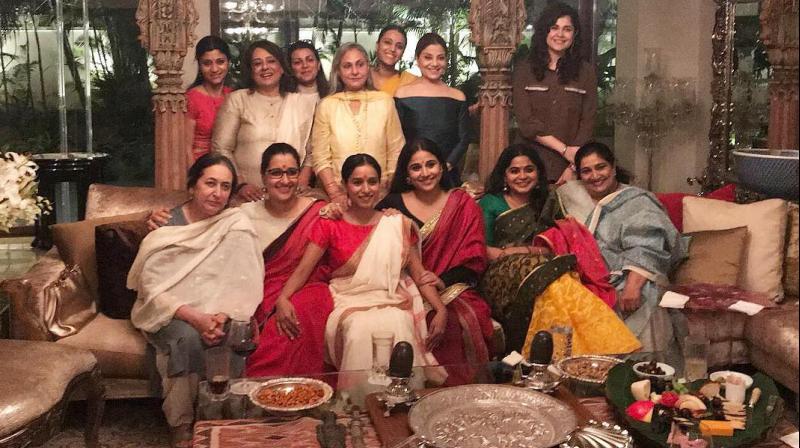 Mumbai: It’s all about women power in Bollywood – on and off screen. After the woman-oriented film ‘Padmaavat’ finally gets its release, here’s another reason to celebrate. Jaya Bachchan, one of the most powerful women and a star wife to megastar Amitabh Bachchan, hosted a bash for the winners of an awards show – an all women gathering.

One more thing that caught our attention was that the women, mind you, all very powerful women, were mostly dressed in a saree – be it Vidya Balan, Tillotama Shome, Ashwiny Iyer Tiwari, Seema Pahwa, Kausar Munir, Swara Bhaskar or Konkona Sen Sharma.

‘Daddy’s production designer Parul Sondh however opted to go for an off-shoulder dress, while Meher Vij kept it casual and Jaya chose an Indian wear.

The celebrations seem to have been held at Jaya’s grand residence, with rich food and drinks at service.

Meher Vij shared the photo with the caption, “Last evening was the perfect reward when Jaya ji invited us for a lovely dinner. What an inspiring energy I had around me with such lovely ladies. One beautiful conversation I would like to share. When Vidya Balan Mam asked me “how does it feel to win awards “ I said - “ I don’t think I have still realised what I have got “ then Jaya ji sweetly said “ yes never realise it “ and I am holding on to that thought forever -- #keepworkinghard #justbehonest #grattitude #kausarmunir #seemapahwa #jayabachchan #kokodiaries” Here’s the post:

Vidya Balan, who is on a rejection spree, won the award for Best Actor In A Leading Role - Female (Popular). Ashwiny Iyer Tiwari, wife of ‘Dangal’ director Nitesh Tiwari, won the Best Director award, while Konkona Sen Sharma too won the Best Debut Director award for ‘A Death In The Gunj’. Meher Vij herself won the award of Best Actor in a Supporting Role (Female) for ‘Secret Superstar’.

It is surprising to know that neither Shefali Shah (who won the award for Best Actor (Female) in a Short Film, ‘Juice’) nor Zaira Wasim (Critics' Award for Best Actor (Female)) made an appearance at the bash. Mala Sinha, who received the lifetime achievement award, or Meghna Mishra, awarded the Best Playback Singer (Female) for ‘Nachdi Phira’ from ‘Secret Superstar’, didn’t make it to the venue either.