The 33-year-old actor, who was facing off against Kriti Sanon, has had two fractures in his left leg and has undergone a surgery. 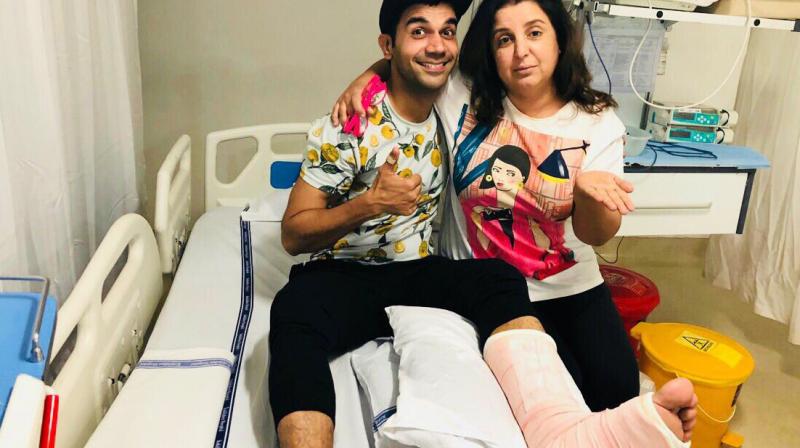 The picture that was shared by Rajkummar Rao and Farah Khan.

Mumbai: Actor Rajkummar Rao has suffered a fracture in his leg while shooting on the sets of reality TV show 'Lip Sing Battle'.

The 33-year-old actor, who was facing off against his 'Bareilly Ki Barfi' co-star Kriti Sanon in the show, has had two fractures in his left leg and has undergone a surgery.

Rajkummar took to social media where he posted a photo with host of the show Farah Khan, laying in a hospital bed with his leg covered in a cast.

"Everyone was asking me to break a leg specially @farahkhankunder and see I've literally done that. Two fractures, one surgery but not that bad.

"Got to learn some amazing dance moves. Thank you team 'Lip Sing Battle' and my apologies @kritisanon couldn't shoot today. Apologies everyone couldn't finish it today but very soon hopefully," he wrote.

Farah also shared another funny picture, saying the actor took the phrase of 'Break a leg' a little too seriously.

This is not what I meant whn I said “ break a leg!!” @RajkummarRao most cheerful patient after a fracture 🙈#LipSingBattle ka 1st casualty pic.twitter.com/y5KQqblDgg