Javed Akhtar supports Priyanka Chopra: Her views on Kashmir are of an Indian

Akhtar was commenting on a Pakistani minister's demand for the removal of Chopra as a UN Goodwill Ambassador for Peace. 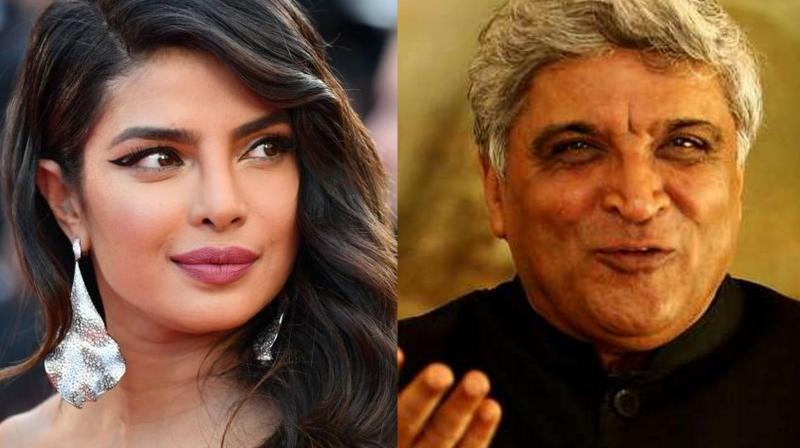 Mumbai: Eminent lyricist and poet Javed Akhtar has said being an Indian citizen, the views of actor Priyanka Chopra supporting the Centre's recent decision on Kashmir will "obviously be an Indian point of view".

Akhtar was commenting on a Pakistani minister's demand for the removal of Chopra as a UN Goodwill Ambassador for Peace, accusing her of supporting the Indian government's decision on Kashmir.

"If her comments have upset the Pakistani establishment, they can do whatever they wish," Akhtar told reporters on the sidelines of a literary event here Wednesday night.

Tensions between India and Pakistan spiked after India abrogated the provisions of Article 370 of the Constitution to withdraw Jammu and Kashmir's special status and bifurcated the state into two Union territories.

She further alleged that Chopra is in favour of a "nuclear war" between India and Pakistan.

"Ms Chopra has publicly endorsed this Indian government position and also supported the nuclear threat issued to Pakistan by the Indian Defence Minister. All this goes completely against the principles of peace and goodwill that Ms Chopra is supposed to uphold as a UN Goodwill Ambassador for Peace," Mazari wrote in the letter.

Speaking about the actor, Akhtar said, "I know Priyanka Chopra personally. She is a cultured, decent and educated person and the fact remains that she is an Indian.

"If there is some kind of a controversy and difference in the points of view of an average Indian citizen (like Priyanka Chopra) and the Pakistani establishment, obviously her point of view will be an Indian point of view."

To another question, Akhtar said, while he is trolled almost every day on social media, "for the last two-three days, there are lot of hate messages because I have made my comment and aired my point of view on (Pakistani Prime Minister) Imran Khan's tweet and some people are upset with me".

He said when "religious bigots" of both communities abuse him, he is convinced that what he says is right.

"The day one of them will stop abusing me, I will wonder what is wrong with me," Akhtar commented.

He had recently tweeted, "Imraan saheb. I will be ungrateful if I dont show my gratitude for your concern about the Indian minorities. I cant imagine, if you care so much for others how compassionate n protective you must be towards the Hindus, Christians , Ahmadiyas, Mohajir n Blochs of your own country."

As his tweet invited a vicious attack on the microblogging website on Wednesday, Akhtar had replied, " ... I am a secular rationalist Nationalist proud Indian who is inconvenient to both Hindu and Muslim communalists."

Asked to comment on the present situation in the Kashmir Valley, Akhtar said, "I am not aware what is going on. As a matter of fact, most of us don't know because there is hardly any information available. We are yet to get the details.

"We know that there were some curfews, some restrictions, so on and so forth," he said.