Ever since the 'Bharat' trailer released, Disha Patani has been grabbing eyeballs with the absolutely gorgeous retro avatar. 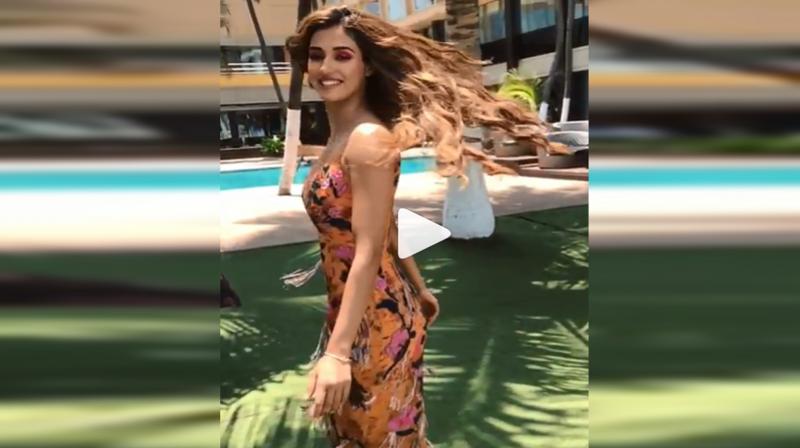 Mumbai: Disha Patani who is all set for the release of her upcoming film with superstar Salman Khan dazzles in orange dress during the promotions of Bharat and posted a picture in slow motion on her social media.

The actress is making heads turn in the floral sleeveless orange dress, leaving the hair open with popping pink eye colour to go with the look.

Ever since the makers of 'Bharat' have dropped the trailer, Disha Patani has been grabbing eyeballs with the absolutely gorgeous retro avatar.

In the song, we see Disha wearing a shimmery trapeze artist dress, bringing all the glamour to the screens. The very next look brings out the drop dead gorgeous as a glowing shell in a yellow saree, blazing through the screens- the two looks that have enchanted the audience ever since the first look dropped.

The first song from the album 'Slow Motion' has already created a huge stir and is tracking big time, garnering immense appreciation from all across, where the killer moves of Disha Patani while shaking a leg with Salman Khan is a definite treat to watch. The song has gripped the nation with its unusual slow motion.

Popular amongst the brands, the actress has emerged as the youngest brand ambassador for many brands and also, the first Indian face for the International brands.

The fitness icon has been treating her fans with her bodacious dance moves and intense acrobatic stunts with a range of sneak peeks from her routine.

Disha has been soaring the temperature high on social media by posting her pictures and sending the fans into a frenzy.

After the back to back success of M.S. Dhoni -An Untold Story and Baaghi 2, which raked more than 100 crores at the box office, Disha Patani will be seen next in Bharat along with Salman Khan, followed by Mohit Suri's Malang.