Entertainment   Bollywood  23 Apr 2017  There was no fear of Friday at home, says Athiya Shetty
Entertainment, Bollywood

There was no fear of Friday at home, says Athiya Shetty

Athiya Shetty is all geared up for her next release — Mubarakan. 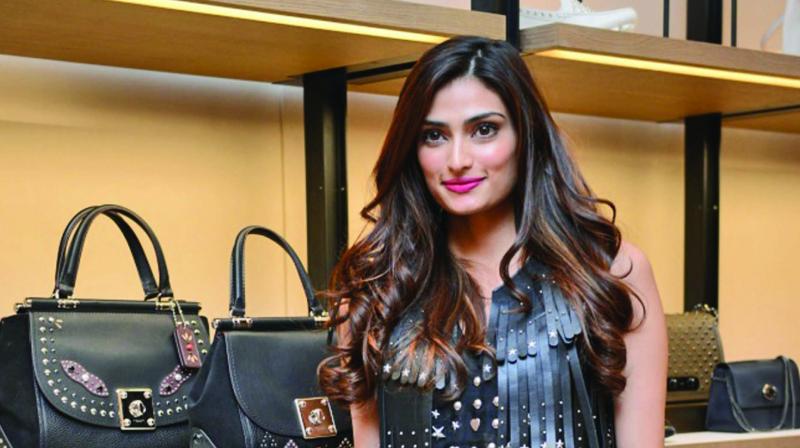 Athiya Shetty is simple and grounded unlike many a star kid. And it’s a normal childhood that she attributes to moulding her like this. As a child, she informs, she wasn’t allowed to go on any film sets. “My mother had a very strong principle of not allowing her kids on any film sets in an attempt to keep us grounded. She structured our (my brother and me) upbringing in such a way that even though we were part of the movie industry, the industry never really became a part of our lives. Also, my dad never really carried the baggage of his work when he was home with us. He never brought his work home. It didn’t matter if he had a hit or a flop. He was always normal with us, and that sense of normality really made us who we are today. There was no Friday fear at home.”

Shetty just wrapped up shooting for Mubarakan, directed by Anees Bazmi. The romantic comedy also stars Anil Kapoor, Arjun Kapoor and Ileana D’Cruz and is slated to release in July. Talking about the same, she says, “It’s a fun movie about a crazy Punjabi family wherein I play a Punjabi girl named Binkle. She is a simple girl but adds to all the chaos and drama. She has a sense of wrong and right and holds her ground. The movie is supposed to be a laughter riot and I had a great time shooting for the movie.”

About working with Anil Kapoor, she shares, “To be working with Anil sir in just my second movie has been a privilege. I got to learn from him tremendously. I have known him to an extent since childhood but now I can really say that I ‘know’ him within the professional sphere as well. I got to see first-hand why he’s called the most hardworking actor in the industry. He absolutely takes no shortcuts, and had more energy than all of us put together. I really don’t know what’s the source of his energy but it was incredibly palpable.”

Talking about her father Suniel Shetty and how involved he gets with her films, the 24-year-old shares, “I always go and ask for his advice. We go back and forth about characters that have been offered, the script, the storyline, etc… but he is someone who truly believes in letting one make one’s own decisions. At the end of the day, he tells me, that you are what you are because of your successes as well as failures. That is how you learn in life and grow. So he will give all the advice in the world but he will make sure that I take my own decisions.” Recently, it was reported that the actress rushed to meet her father, as she had not seen him in a long time due to shooting and travelling. So ask her if she is an out-and-out daddy’s girl or a mama’s angel and she replies, “I am both. I have a different relationship and equation with them, individually. My mother is my best friend. But I am equally close to my father as well. However, I think, I have become closer to him after growing up. There are certain things that I tell only my dad and not ma… and likewise there’s stuff that I only tell my mom and not dad. They both are equally special.”

The actress is also quite the fashionista and confesses that she is crazy about handbags. She was in the capital to launch the newest store of American high-end brand Coach at DLF Emporio, Vasant Kunj.

Athiya explains, “I am totally crazy about bags. I went out and bought a luxurious designer bag when I got my first payment. That’s how much I lust over them.” So what are the five things that one will find inside her bag? She whispers “a chocolate” and breaks into laughter. “Okay, to be specific, a KitKat. Then a lip balm, my phone, a comb and my iPod.”

Lastly, ask her how she plans to take her career forward and she smiles, “Each day as it comes. I think I plan too much and that too way ahead of time. That adds stress to my life. Now I have decided to not plan so much.”