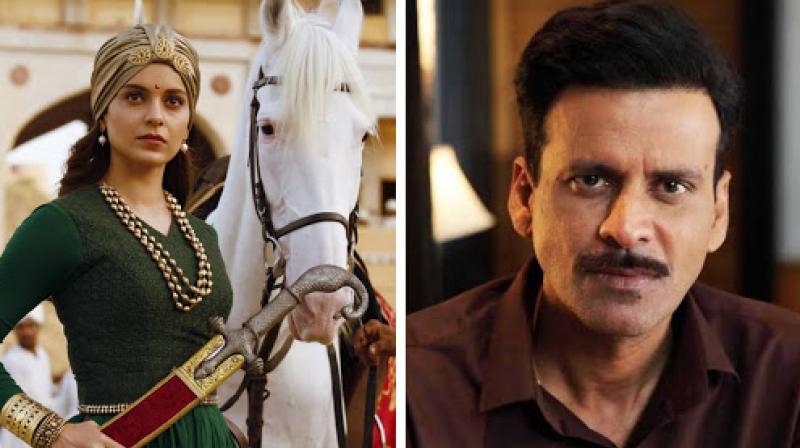 New Delhi: Bollywood actors Kangana Ranaut and Manoj Bajpayee along with their South colleague Dhanush on Monday won top acting honours at the 67th National Film Awards, which walked the tightrope between mainstream and indie cinema.

Director Priyadarshan's Malayalam film "Marakkar: Arabikadalinte Simham" was declared best film and Sanjay Puran Singh Chauhan named best director for the Hindi film "Bahattar Hoorain" by the jury headed by filmmaker N Chandra, who said they judged the movies "not as gods but as parents".

Late actor Sushant Singh Rajput's "Chhichhore", directed by Nitesh Tiwari, was adjudged the best Hindi film in the awards for 2019.

The National Awards, given by the Directorate of Film Festivals which comes under the Ministry of Information and Broadcasting, were delayed by a year due to the pandemic.

This is the fourth National Award for Ranaut, who is known for her combative comments and hit the headlines when she locked horns with the Maharashtra government after her office was demolished by the BMC. She won the best actress award this time for her performance in the Hindi films "Panga" and "Manikarnika". The other three National Award wins were best actress for "Tanu Weds Manu Returns" and "Queen" and the best-supporting actress trophy for "Fashion".

Bajpayee, considered one of Hindi cinema's finest performers, won the best actor award for his role in the Marathi film Bhonsle. He shared the prize with South star Dhanush who won it for his role in the Tamil hit "Asuran". Bajpayee previously won the National Award for best-supporting actor for "Satya", whereas this is Dhanush's second National Award. "I'm really happy and thankful who believed in this film," Bajpayee said thanking directors, cast and producers. In a video posted on Twitter, Ranaut thanked the teams of both the films and said the award is shared by them all.

Best director' Chauhan said he is "overwhelmed" at his second National Award after the 2010 film "Lahore", for which he won the Indira Gandhi Award for Best Debut Film of a Director. "There were so many wonderful films. I'm so overwhelmed. To get it now in the best director category is humbling. I am quite speechless, I am on cloud nine," Singh told PTI.

The award for the best film on social issues went to Marathi film "Anandi Gopal", the Nargis Dutt award for National Integration was given to "Tajmal" and the popular film providing wholesome entertainment was given to the Telugu movie "Maharshi", starring Mahesh Babu. The Indira Gandhi award for best debut film of a director went to "Helen" by Mathukutty Xavier. The Malayalam film also bagged award in the best makeup category. Director Vivek Ranjan Agnihotri was named the best dialogue writer in the screenplay category for his film "Tashkent Files", which also helped Agnihotri's actor-wife Pallavi Joshi land the best-supporting actress win. Agnihotri said winning the honour is a dream come true. The film revolves around the mysterious death of then prime minister Lal Bahadur Shastri in 1966. Agnihotri dedicated the award to Shastri and "the common people of India, who supported the film when everyone else had abandoned the project."