Directed by Siddharth P Malhotra and produced by Maneesh Sharma, the movie releases on March 23. 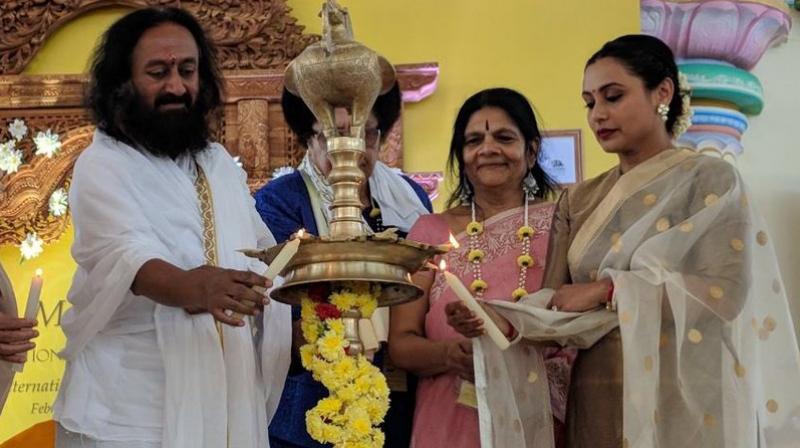 Sri Sri Ravi Shankar and Rani Mukerji at an event.

Mumbai: Rani Mukerji, who is occasionally seen in a public outing, has been promoting her forthcoming Yash Raj film ‘Hichki’ to a great extent. The actress recently visited International Women’s Conference which was also graced by Sri Sri Ravi Shankar.

“Rani will be part of the inaugural session of the International Women’s Conference, a prestigious and highly followed annual event on 23rd February. She will put forward her views on the weaknesses that exist in society and how we could overcome them. Sri Sri will also put forward his views on the importance teachers have in imparting the right education for students so that they can identify weaknesses and tide over them,” a source close to the event had revealed.

When contacted, Rani had also confirmed the information saying, “Sri Sri Ravi Shankar has focused on the power of positive thinking, of positive actions and of universal love and his message has resonated with countless people. It will be amazing to be part of this session and hear him speak. ‘Hichki’ is all about harnessing your positivity and inner peace to bring out the best in you and I’m going to speak about this in his presence. I look forward to this interactive session.”

The actress also spoke about struggles (Hichkis) in a leadership. Watch her video here:

Rani plays the character of Naina Mathur who has a nervous system disorder, Tourette syndrome that forces an individual to make involuntary repetitive movements or sounds. ‘Hichki’ focusses on turning disadvantages into opportunities and staring down at challenges that life throws at one. It highlights this through the story of Naina, who faces discrimination from our society that firmly believes she cannot be a teacher because of her disorder.

Directed by Siddharth P Malhotra and produced by Maneesh Sharma, the movie releases on March 23.