It is the first time that Dino Morea and Varun Dhawan have come together for a video. 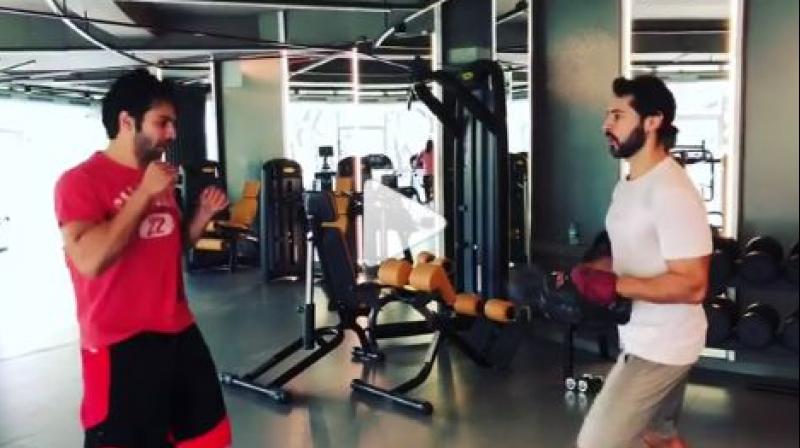 Mumbai: Varun Dhawan is one of the fittest superheroes from the current generation. He has often been a fitness inspiration in his gym videos or by flaunting his drool-worthy body on the big screen. Imagine what would happen when he would accompanied by one of the fittest and handsome actors of their time – Dino Morea. Well yes, Varun is training in boxing with Dino himself and the video is pure gold to watch. Here it is:

The video honestly takes us on a throwback to ‘Mukkabaaz’, Anurag Kashyap’s directorial movie featuring co-writer Vineet Kumar Singh in the lead role. The movie released in theatres on 12th January 2018 and has been widely appreciated for Vineet’s hardwork and dedication towards his role. In the movie, Vineet takes up boxing in order to win his girl (played by Zoya Hussain). The movie also starred Jimmy Sheirgill and Ravi Kishen in pivotal roles.

Varun Dhawan has recently shot for ‘October’ poster. Along with that, the actor is also prepping for YRF’s film ‘Sui Dhaaga: Made In India’ with Anushka Sharma Kohli. Anushka recently got married to her boyfriend, cricket captain Virat Kohli.

Dino, most popular for his affair with Bipasha Basu Singh Grover, is seen doing special appearances in Bollywood movies. Apart from that, Dino is also an entrepreneur as he has opened his own e-venture.

It is the first time that Dino Morea and Varun Dhawan have come together for a video. Is a movie together the next thing?