Sabyasachi issued a clarification, saying that the saree was indeed gifted to the actor by her mother. 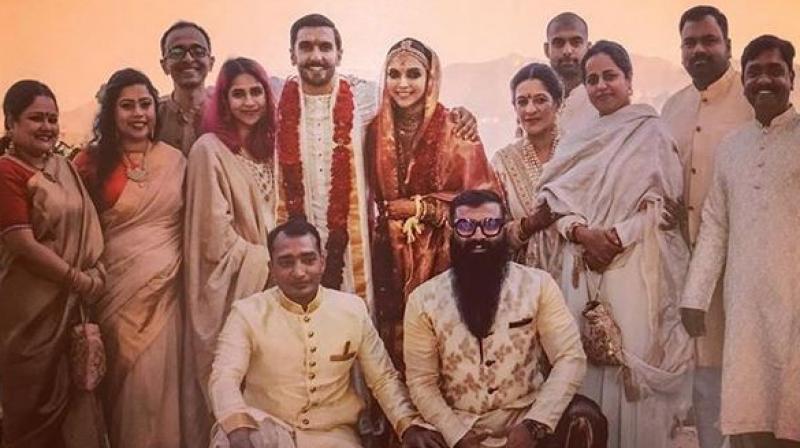 The picture was taken on November 14 after Deepika and Ranveer's Konkani style wedding. (Photo: Instagram | nitashagaurav)

Mumbai: Ace designer Sabyasachi Mukherjee has clarified that the saree actor Deepika Padukone wore during her Konkani wedding to Ranveer Singh was not designed by him but a gift from her mother.

Mukherjee's Instagram handle has been sharing pictures of the newlyweds from their wedding ceremonies and in one of the photos, the designer claimed in the caption that Deepika was dressed "head-to-toe in Sabyasachi".

An online portal, Voice of Fashion, reported that "Padukone's Kanjeevaram red gold wedding sari" was bought by her mother Ujjala from House of Angadi, Bengaluru.

After taking note of the report, Sabyasachi issued a clarification, saying that the saree was indeed gifted to the actor by her mother as per the Konkani traditions.

"Deepika's wedding sari was given to us by her mother Mrs Ujjala Padukone. We have just received information that the sari was bought from Angadi Galleria, Bengaluru and we would like to them due credit for the same," he wrote on Instagram.

Ranveer and Deepika, who dated for six years, tied the knot last week in two ceremonies at Lake Como, Italy.

On November 14 morning, the couple solemnised their relationship in a South Indian wedding. It was followed by a North Indian ceremony on November 15.

Deepika and Ranveer hosted a reception in Bengaluru and will do so in Mumbai too.