Hope that we make the final nominations: Alia Bhatt

Zoya Akhtar’s Gully Boy, based on Mumbai’s street rappers, has been selected as India’s official entry to the Oscars. 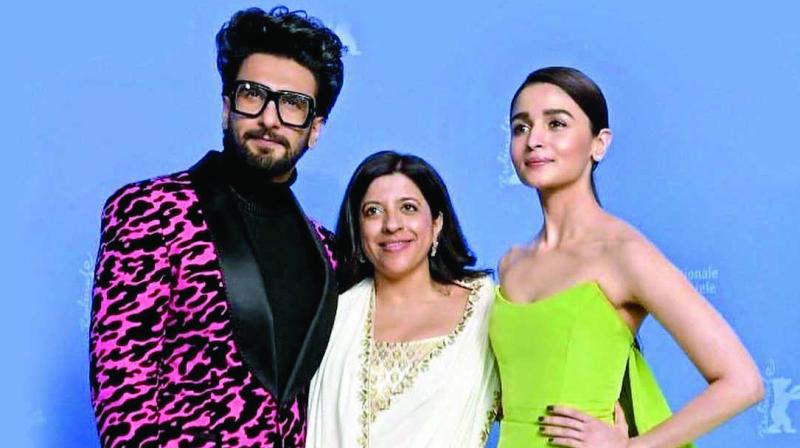 This is particularly celebratory news for Alia Bhatt, who will soon be celebrating her boyfriend Ranbir Kapoor’s birthday on September 28.

Aparna Sen, the chairperson of the Oscars committee, was apparently impressed with the film’s originality, vivacity and motivational morning mood.

This is particularly celebratory news for Alia Bhatt, who will soon be celebrating her  boyfriend Ranbir Kapoor’s  birthday  on September 28.

In an exclusive chat she said, “This is such a big first for me, my first film to go to the Oscars.  It’s a  big deal  for me and such an exciting moment for team Gully Boy. I can’t  tell you my feelings right now. For now there’s just hope that we make it to five  final nominations for  best foreign film at the Oscars. But being sent as India’s official  entry to the Oscars in itself is a big big deal for me.”

Director Zoya Akhtar couldn’t contain  her excitement either. “This has been a great year for me and I am so overwhelmed with the response our work is getting. I am thrilled and very grateful that Gully Boy has been picked as India’s official entry for the Oscars. It’s crazy to receive such news days after my web film Lust Stories received a nomination for the Emmys,” she gushes.

Zoya’s stepmother Shabana Azmi adds, “I am thrilled and so proud. I loved the film and am rooting for it with all my heart. I find it amazing that both Zoya with Gully Boy and Farhan with Dil Chahta Hai made path-breaking Hindi films, just like their father (scriptwriter Javed Akhtar) had done 40 years ago with Zanjeer and Deewaar! How rare is that, three  path-breaking  writers/filmmakers in one family.”

Siddhant Chaturvedi, who rose to fame with Gully Boy  as MC Sher, is over the moon. “I am  super-excited. My first web show Inside Edge got nominated for the Emmys last year and now my first film is going to the Oscars! It’s a very special moment. It’s all about Zoya (Akhtar) Ma’am’s genius, Ranveer Singh’s uplifting bromance, producers Ritesh Sidhwani and Farhan Akhtar’s sir’s mentorship, and the  credit goes to the whole crew.”

As per Kalki Koechlin, the film is a great representation in India’s new dawn. “I am really happy that the film got nominated and it is a good entry to the Oscars. I think Gully Boy is a great representation of India’s new dawn — one where we increasingly stand united by hope and pave the way for real, social change. The Indian Rap scene has considerably helped in pivoting this ‘change’ conversation favorably, and  movies like Gully Boy are a testament to that fact and to the international audience that good Indian cinema now attracts,” she said in a statement.