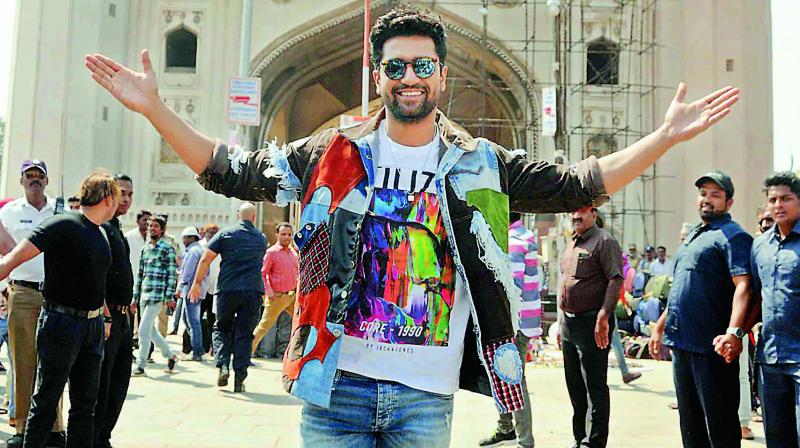 “I really love the way the Charminar is maintained, and also the surrounding areas,” says Vicky Kaushal, as he gazes out at the city’s famous landmark. “Whenever I come here, I have hardly any time to spend. I made it a point to visit the Charminar this time.”

Vicky was speaking on the sidelines of events to promote his upcoming movie Bhoot part one — The Haunted Ship. Irani chai and Hyderabadi biryani are other favourites of his.

Revelling in the glorious architecture of Hyderabad and his connection with the city, he said he wished he could have climbed to the top of the minarets and viewed the city from that height. “I’ve put that on my bucket list for my next visit,” he adds.

Vicky Kaushal feels Hyderabad has a good market for horror movies, given the number of films in that genre that are made in Tollywood. Hence, the choice of the city to promote his film.

On his first attempt at a horror film
“While shooting, I was bit scared but it was fun doing it. The refreshing part of the movie is that it’s an out-and-out horror movie with no romance, comedy or erotica involved. Interestingly, in this movie you will see me playing a role of a father, which is another first for me,” shares Vicky.

For any movie to work, the equation between the director and his actor needs to be excellent to get the visuals right on screen. For Bhanu Pratap Singh and Vicky, it was friendship from their first meeting. “We are both very young and new to the film industry and I believe that it’s our raw passion which worked well for us. There were lots of technicalities involved and the whole team had to work really hard to get everything on point. For me the most difficult part was to act like it was a dark room when it was in fact a brightly-lit one, to get the fear and emotions spot on,” says Vicky.

On his film journey
“Whatever movies I have done were for the love of the script. And my journey from the days of Masaan, is very organic. I believe God has given me more than I had asked for. When you go through this sort of journey, you don’t take things for granted. I feel blessed to work with such amazing people,” says the Uri actor.

On the fact that his movie will clash with another coming-of-age film, Ayushmann Khurrana’s Shubh Mangal Zyada Saavdhan, Vicky says he doesn’t care about the BO numbers. For him, there is an audience for every film and he is really happy that both the movies are releasing together as both actors are working on great scripts and have created their space in the industry.