Entertainment   Bollywood  21 Dec 2017  This film might reunite Shah Rukh and Priyanka on screen and it’s not Don 3
Entertainment, Bollywood

Shah Rukh Khan and Priyanka Chopra were quite the name, especially after their chemistry in ‘Don’ and ‘Don 2’. 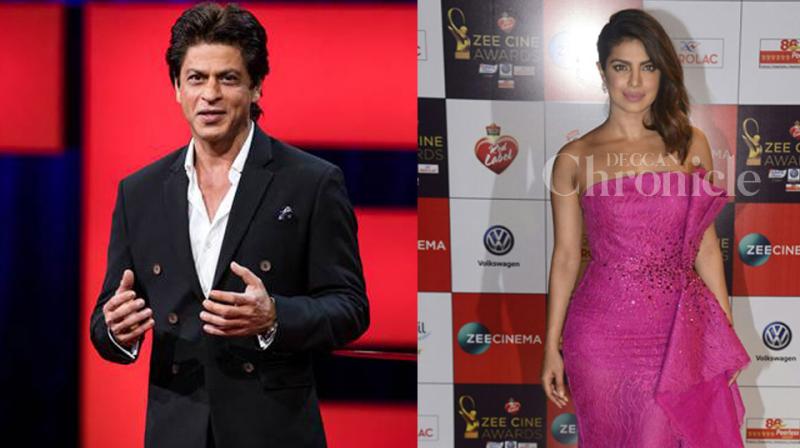 Mumbai: Shah Rukh Khan and Priyanka Chopra were quite the name, especially after their chemistry in ‘Don’ and ‘Don 2’. The two alleged exes had been forgotten, till Farhan Akhtar announced ‘Don 3’.

While it is still unclear who will be cast with Shah Rukh in ‘Don 3’, there seems to be some scope that PeeCee and Shah Rukh will be cast in Rakesh Sharma’s biopic.

Asian Age had earlier informed you through our source, “Aamir strongly recommended the Rakesh Sharma biopic to Shah Rukh as a script worth walking that extra mile for. More so, since Aamir intends to devote a substantial period of his time to a very dear project of his, presumably the Mahabharat, and has stopped accepting any other assignments currently.” This made clear that Shah Rukh would consider the project.

Priyanka too seems to be keen about the project. At a recently held awards function, she said, "I have finalised two-three scripts. Now, I am left to make announcements. Yes, Rakesh Sharma biopic was one of the scripts I read. I was approached for the film when Aamir was a part of it. We weren't supposed to do it next year, it was for 2019. But as of now, I don't know anything else about the movie."

She also confirmed that Aamir is not a part of the project anymore, and when asked about Shah Rukh replacing Aamir, she reacted, "I don't know. I haven't got any confirmations. I haven't spoken to Sid or Mahesh sir. As soon as I know, I will see."

Shah Rukh and Priyanka have avoided each other at every possible occasion. Priyanka might have even confirmed that Shah Rukh is now his ex, all this with the help of a similar jacket they both sported. Looking back, Priyanka had become quite close to Shah Rukh during the shooting and promotions of ‘Don 2’. The two were spotted coming out together at 3 am, and some gossip columns even went on to claim that the two had a secret marriage in Dubai. Furthermore, they mentioned that Gauri had to intervene between them to make sure they were never seen together again.

The situation seems to be intact till date, since India Today reports that the former co-stars avoided each other completely at the same awards show venue. According to their report, Shah Rukh came in early and left even without posing for the cameras. He went a step forward by using the entrance meant for only the performers to get to the venue. This was followed by Priyanka’s entry. PeeCee posed for the cameras and then went to the stage for her performance.

Looking at their behaviour, we’re unsure if they will ever work together again, but then there have been many examples of exes keeping their professional attitude on the front while working, like Shahid Kapoor and Kareena Kapoor Khan coming together to promote ‘Udta Punjab’ or Ranbir Kapoor and Katrina Kaif making noise over ‘Jagga Jasoos’. Maybe only time will let us know if Shah Rukh and Priyanka will actually share the screen space again.