Celebrity photographer Viral Bhayani has a dedicated team only to click Taimur’s pictures. 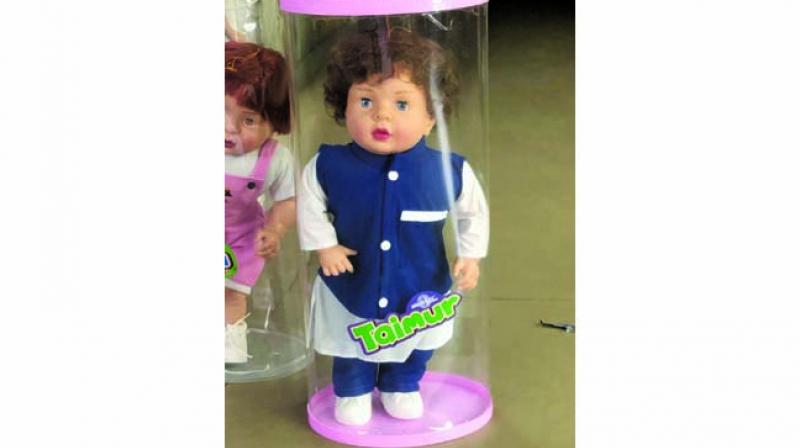 The Taimur Doll doing the rounds on Internet

Not yet two, Taimur Ali Khan is billed as a bigger star than any other A-lister today. Little surprise then that he has a posse of dedicated photographers following his every move.

He is cute, un-miss-able and the Internet sensation of India. Taimur Ali Khan, Saif Ali Khan and Kareena Kapoor’s son is the most searched name on any social media platform. As he readies to celebrate his second birthday next month, his popularity is spread across the country. And now an image of a ‘Taimur doll’ from a local Kerala toy store is breaking the Internet. The doll is selling like hotcakes on an online shopping website for baby products. Such is his popularity that currently, they are almost sold out.

As the news of the doll reached Saif, he quipped, “Maybe I should copyright Taimur’s name. But seriously, it is fine. I hope the dolls sell well. It’s like having your face on a pack of sparklers during Diwali.” While the demand for Taimur is ever growing Saif hopes Taimur is safe and happy. “I only ask that they bless him in return,” he added.

A photographers’ favourite, many of them wait for hours to capture his day.  Celebrity photographer Viral Bhayani has a dedicated team only to click Taimur’s pictures.  “He is a bigger star than any A-lister at the moment. We know what time he goes to the school, to his aunt’s and we follow the car. I am spending lakhs only on getting Taimur pictures,” says Viral. Thanks to his growing popularity, the paparazzo says various other celebrities are being ignored.

Another celebrity photographer Yogen Shah adds, “He knows that when he will step out, there will be people standing out there waiting for him. These photographers are always around and he remembers them now. Moreover, he has become habituated to seeing them on daily basis. It is more a kind of routine for him. Interestingly enough he has become camera friendly.”

From Instagram to Twitter to Facebook, there are more than a couple of pages solely dedicated to this star kid. A satire page called Pictures of Taimur Ali Khan To Distract You From Real Issues uses his images to talk about various issues. Eighteen-year-old Aparna Sudhir, started the Tamur Ali Khan Pataudi (initially called Junior Saifeena) account on Instagram around two years back when her favourite star couple announced their pregnancy. She started off by putting Saifeena pictures with a total follower base of 50. Soon after Taimur was born, her follower base crossed 81000. 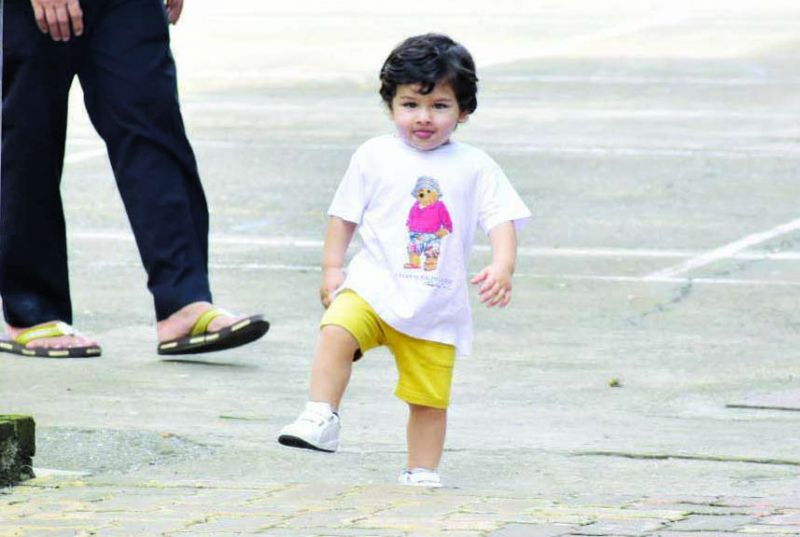 “I started the account purely out of admiration for Kareena and Saif. I just re-post Taimur’s pictures, clicked by the paparazzi, as quickly as possible. After three-four months, I started making funny memes around him, in a positive way though. I started it because I like Saif and Kareena, but look at him he is so cute. He does that ‘Hi’ and ‘Bye’, and you automatically get attracted to him,” giggles Aparna.

Viral explains that for most, scrolling through Taimur’s images is no less than a therapy. “When you are stressed, you do various things to unwind yourself. When you look at him all stress disappears and you feel good. You light up; your brain cells immediately send out a signal that something exciting is happening. It is unbelievable how a face can make you happy,” he gushes.

Both Viral and Aparna attribute his charisma to his grand lineage. “He is not an ordinary kid. No kid has got the kind of presence that he has got. His entire being is very scientific, how he looks and what he does. He has got that Kapoor and Pataudi gene. Even his presence in front of the camera is so scientific,” says Viral. To this Yogen adds, “People want to see him. People want to play, talk or keep looking at him. He has got that quality, uniqueness factor that not everybody has.” The photographer sends out his boys at 11 in the morning to click Taimur.

However, what is most amusing is the little munchkin’s capability to pose for cameras without missing on a single lens aimed at him. “He gets the camera with ease. Even most of the big celebrities don’t know how to be in front of the camera. For instance, if there are 15 cameras will Taimur manage to pose for all 15 of them? Yes, he will. He knows how to pose for each one of them. He is that good. He is good gifted, he has a star appeal,” he says adding that even his grumpy face is found to be adorable.   “The other day he went to a music shop and was playing with a congo. When his nanny came to take him, he started crying because he didn’t want to leave. When he cries that is also a joyful moment for us. It makes him cuter,” he concludes.