Entertainment   Bollywood  21 Nov 2017  Video: Aishwarya in tears as she loses her cool at media on 'Day of Smiles'
Entertainment, Bollywood

Video: Aishwarya in tears as she loses her cool at media on 'Day of Smiles'

The actress got upset by the chaos created by media persons present at the event, and pleaded with them to maintain silence. 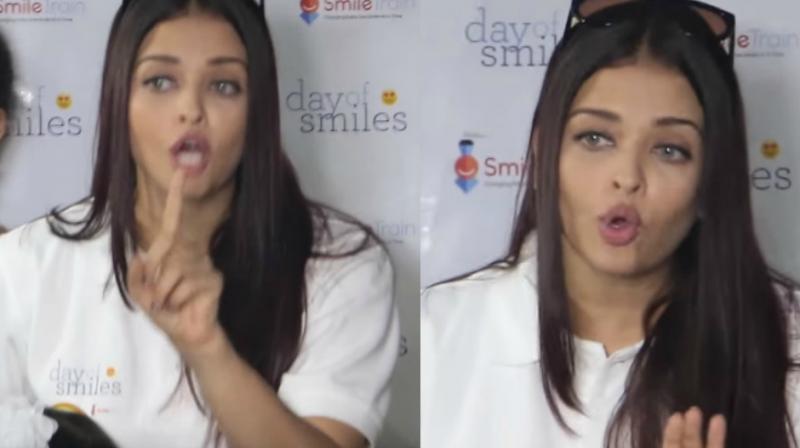 Mumbai: Aishwarya Rai Bachchan recently was calm and composed when her husband Abhishek Bachchan seemed to scold a photographer for clicking 'inappropriate' pictures of her while they were exiting Manish Malhotra's house.

But the actress couldn't hold back her frustration at media at an event on Monday.

The actress, along with daughter Aaradhya, celebrated the birth anniversary of her late father Krishnraj Rai as the ‘Day of Smiles’ with children from the NGO Smile Foundation.

Aishwarya, however, got upset by the chaos created by media persons present at the event.

Lashing out at media and even breaking down in the end, Aishwarya said, “I’m seriously saying, stop it. You do not need to take my photograph, asking you all to please keep silence. You neither need this picture nor the video. We are requesting you to maintain peace. We all are familiar with such events, we belong to this business, they (kids) don’t. Please show some respect. They do not know our worlds. This is not a premiere, not another public event. What’s wrong with you all?”

The actress also reportedly sponsored the surgeries of 100 children with cleft lips and palates on the occasion.

The month of November has been filled with celebratory occasions for the family with the birthdays of Aishwarya, Aaradhya and another grand wedding, all of which had made headlines.

Aishwarya also kicked off the shoot of her film 'Fanney Khan' opposite Anil Kapoor this month.