The actor reminisced watching the superstar trying to perfect the trick at a tour. 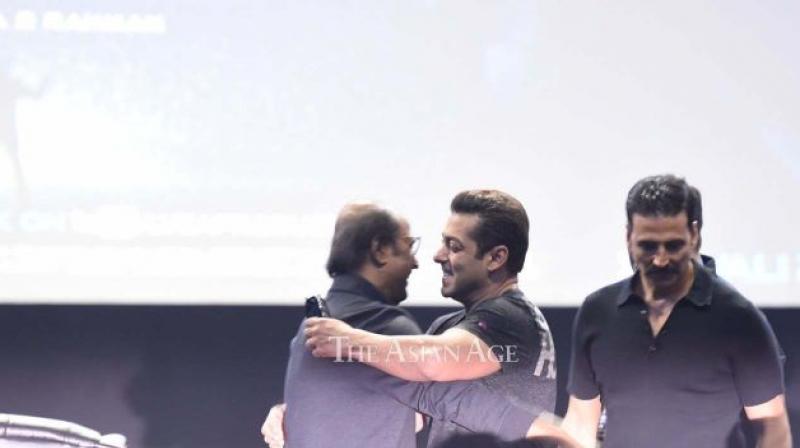 The two had performed at the Wembley's during Amitabh Bachchan's 'Jhumma Chumma' London tour in 1990.

Mumbai: Salman Khan knows howto win hearts and he's effortless at it. The superstar, who turned up uninvited, just to meet legend Rajinikanth at the launch of Shankar's '2.0,' also starring Akshay Kumar.

While at the show, the actor reminisced a particular incident from his own newcomer days. Salman had traveled with Amitabh Bachcn on his Jhumma Chumma tour to London back in 1990. The troupe of celebs also included Rajini, incidentally.

"During the tour, I went to the bathroom, and I see Rajini garu throwing cigarettes like this(signalling sideways). I asked, 'Garu what are you doing?' 'There's a lot of wind outside'. The concert was an open air one at the Wembley arena. It was windy, it was cold. There were lot many cigarettes lying there. So I went backstage to see if he gets it right. One shot, he threw the cigarette it came straight into his mouth. I thought that was phenomenal," the actor reminisced.

Salman also lavished praised on his contemporary, Akshay, saying he was the only one from his generation to have grown and evolved as an actor.

'2.0,' an AR Rahman musical, which has Rajini reprising his role as the AI humanoid, Chitti, is set for a Diwali 2017 release. Akshay Kumar will be playing the main antagonist, returning to negative roles after a long while. The film, which is simultaneously being made in Tamil and Telugu, will be dubbed in Hindi.