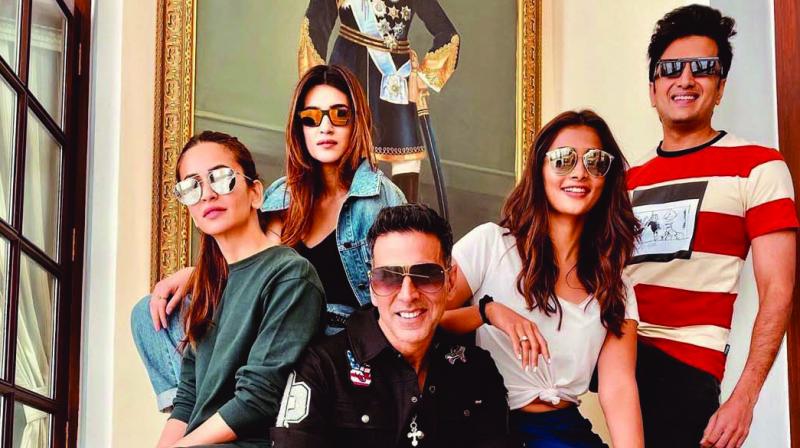 Get ready for a triple dhamaka at the box office this Diwali, because like it or not, it’s not going to be a box office walkover for producer Sajid Nadiadwala’s self-professed ‘mindless entertainer’ Housefull 4.

Debutant director Tushar Hiranandani’s Saand Ki Aankh and Mikhil Musale’s Made In China are both being raved about days away from release as wildly entertaining and perfect Diwali offerings, with actors who are stars in their own right. This is an unexpected setback for Housefull 4, which thought Diwali was theirs for the taking. But are the audience, that lapped up the sheer inanity of the first three films, open to welcoming the festive-time fatuousness for the fourth time?

Trade experts secretly say not really. “Housefull 4 is almost twice as expensively-budgeted than Housefull 3. Recovery won’t be easy. Also, the film looks star-studded, but it has only Akshay Kumar from A-listers. Unless you want to count Bobby Deol and Ritesh Deshmukh as stars, and that’s a real stretch,” an expert observes.

Contrary to the image that the other two films seemed to project, Saand Ki Aankh and Made In China are not small arthouse films. Featuring an impressive super-talented cast, both the film are original, intelligent, engaging and inviting whereas, the same old gags from the first three Housefull films seem to have been served up in the fourth one in the garb of a Baahubali-styled reincarnation theme. The trailer and the songs appear to be desperate in their need to entertain at any cost.

Akshay Kumar’s Bala song is startling in its crowd wooing intensity. The high pitch may work in the small towns, but multiplex audiences aren’t enamoured by the idea of watching the Mission Mangal star on an entirely different mission this time.

While other trade experts chose not to comment on the Diwali competition at the box office, Amod Mehra says, “Let’s see how it goes. Obviously Housefull 4 is a big franchise that will hog screens and shows, so the other two films will definitely be affected. The producers of Saand Ki Aaankh claim that their film was definitely coming on Diwali, but Made In China also announced itself as a Diwali release. Two films are okay, but three is definitely a crowd.”

The fake squabble between Sajids

Some over-imaginative portals are doing a great job of assuming scandal where none exists. A section of the media reported last week that Sajid Khan, who directed Housefull 4 until he was sacked for sexual harassment, has sent a legal notice to the producers asking for his rightful credits.

However when contacted, producer Nadiadwala said, “There is no truth this. We haven’t received any notice.”

Khan was the director of the first three Housefull films. He was on board to direct the fourth film in the franchise when he was trapped in the #MeToo net and had to leave the project. It was taken over by Farhad Samji.

The reports of Khan demanding his credits for direction cropped up recently, but the fact is that he is lying very low while Nadiadwala is looking forward to the release. “This is our feel-good don’t-mind franchise, just loads of fun with no social message. We don’t want any negativity attached to it,” Nadiadwala shares.