Bollywood is boring to me, says Twinkle Khanna

The author and actor opens up about feminism, being a misfit and embracing her ‘androgynous mind’. 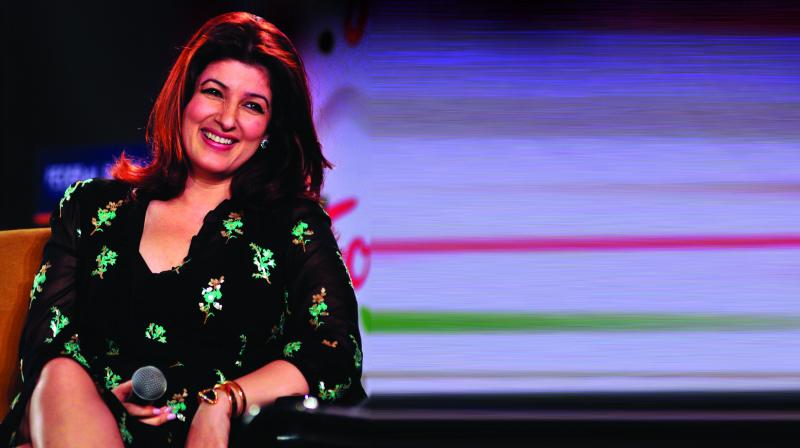 Twinkle Khanna at an event organised by YFLO in the capital. (Photo: Bunny Smith)

When Twinkle Khanna decided to pick up her pen at the age of 38, she had finally found her calling. And her writing reflects not her early years in Bollywood when films like Mela were being made or when words like sexism and gender equality were confined to social study classes, but the present times of #metoo and raging public debates around feminism. Talking about the past, she simply says, “I don’t look back.”

While ‘Mrs Funnybones’ has emerged out of the actor much later in life, there was no doubt about her being a ‘misfit’, as she calls herself. For someone who had also harboured a dream to be a charted accountant, and had been pushed into Bollywood, she says, “I was always a misfit. I would be knitting on the sets of my films or reading. My grandmother taught me how to knit and ours was a nice hippie household. Someone was always reading, or knitting or playing the guitar.” But it didn’t seem like a fitting thing for an actor to do back then. “I was never interested in fitting in,” she tells the audience at an event organised by YFLO Delhi in the city on Thursday.

It is this very attitude that has transformed the actor into a much adored author and columnist today. In the capital to promote her recent book, Pyjamas are Forgiving, the actor says, “The pajama is a metaphor. It is very nice to be accommodating like pajamas are, but sometimes as women we let our drawstrings too loose and before we know it we are standing in our underwear.” The book taps on the importance of consent and is in a way a ‘Me-too book’.

Twinkle says, “Consent has been ambiguous. Even five years ago, a man wouldn’t stop. He would try regardless. That has changed and it has not only affected women. I think men are also looking at their ingrained behaviour and it filtered into this book.”

Asked why she doesn’t write about Bollywood or set the book closer home in a territory she knows so well, Twinkle replies, “Bollywood is boring to me. I don’t write about it in my columns or short stories, I don’t find it interesting. I have seen it and why would I write about it. It is too familiar.”

She goes on to say, “I have worn hideous costumes, I have said terrible lines. I have danced and done all the pelvic thrusts.

But I learnt how to laugh at myself and I think that is one of the reasons why I am here. Now I hope people will forget Mela and remember me for my books.”

Having been called a tomboy, she recalls, “I had a moustache, I didn’t use lipstick till I acted in movies. A lot of people told me that I talk like a man, I think like a man and I really thought that there is some man trapped inside my body. But it wasn’t like that. I realised soon that my perception didn’t have a gender. As Virginia Woolf says, ‘An androgynous mind is an incandescent mind’.”

On her views on feminism, Twinkle says, “I think we keep telling women to speak up and be more independent. But you have to tow the line of the hand that writes the cheque. That I think is the biggest problem. So economic independence is the primary thing for women to be fearless.”

With her strong opinions, Twinkle also has to handle her share of trolls. “But I have a thick skin because I have the biggest troll at home — my mother,” she laughs.

She says she won’t ever write a book about herself, “I won’t do that because it would be all lies. All that you can find about me is in these books, in fiction,” she signs off.