On International Yoga Day, Shilpa Shetty shares how yoga transformed her life and why she doesn’t mind binging on Sundays. 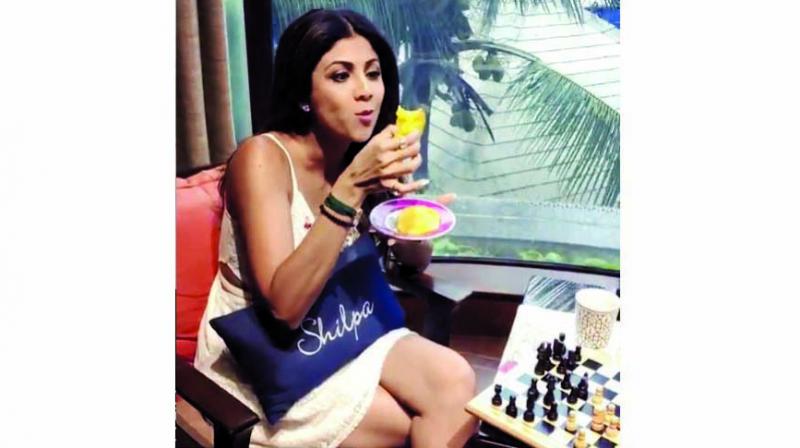 With International Day of Yoga just around the corner, we spoke to one of the biggest advocates of the practice: Shilpa Shetty Kundra. Thanks to her videos and posts, the actress has become a symbol of fitness in Bollywood.

When Shilpa Shetty lost her post-pregnancy weight in just three months, everyone was surprised. But the actor credits her weight loss to dedicated physical workouts and mindful eating. Speaking about her long-standing relationship with yoga, Shilpa explained how it transformed her life. “It changed me as a person. I am far more energetic and even more positive because it not just cleanses your mind, but also your chakras. It is an energy giver; it’s that fuel which is needed in a profession like mine. It reminds me to be in the moment. Which is why despite not doing movies in the last 11 years, I continue to stay relevant.  I will use this as my weapon to move forward and leverage my name in bringing about good health,” says the actress who recently launched an app called ‘Shilpa Shetty – Fitness’, where she shows users how to perform asanas.

The Apne actress also talked about why she is so motivated to make yoga mainstream in India via her app. “Sometimes I look back and there is so much that I want people to know about when it comes to yoga. I think we undervalue what we have, though westerners are making such great use of it. We in India don’t value this science,” she muses, adding that she is an advocate for yoga everyday, and not just on International Yoga Day.

Shilpa has also been actively using social media to speak about yoga and fitness. “Health is very undervalued and there is a certain apathy towards it. So, the whole idea of the app was to bring about awareness. I am happy that I am playing a catalyst in bringing about change,” she says.

The actress recalls her initial foray into the fitness world when she launched her first fitness DVD.  “When I did that 12 years ago, nobody thought something of this sort can happen. And it was the most-watched yoga DVD at the time… even now, people talk about it,” she says, adding that the fast pace of our life makes it difficult to sit and watch a DVD.“ I don’t think anybody even has a DVD player at home; OTT platforms have taken over: People want stuff on the move, they want to be able to access the app and that’s how the idea of an app came in.”

The 44-year-old actress has inculcated the art of meditation in her everyday life. “I meditate at the end of the day. I do breathing exercises every day. I am learning advanced yoga right now, so I do that at least three to four times a week,” says Shilpa, who seemingly hasn’t aged at all. According to her, yoga has helped her stay youthful and agile. “It’s a known fact that yoga is able to reverse the signs of aging, and I just feel that that’s just one of the perks. After you reach the age of 35 or 40, your energy diminishes. You need nutrients and multivitamins, and yoga strengthens you from the inside. There are no other forms of exercise that can work on your internal organs,” explains Shilpa, who is known to take a break from fitness one a week to enjoy a “Sunday Binge”day. Speaking about the Instagram trend that she started, Shilpa says: “I do it only once a week, and a lot of people also make fun of me for it. I don’t care, as I wanted to show people who say ‘she must not be eating at all’ that I do eat. But I lead a very disciplined life — I don’t eat after 7.30 — but on Sundays, I eat.” Sundays for her is ‘family day’ and she prefers spending time with her family by going out for lunches. “We all are busy, so that one day, we make sure to have brunch together.” But one thing the actress avoids on all days is white sugar. “So the sugar I use is coconut sugar. It literally tastes the same, and it’s available everywhere,” she concludes