Say Tigmanshu Dhulia and Mahie Gill who were present at the location where goons manhandled the members of an under-production web-series. 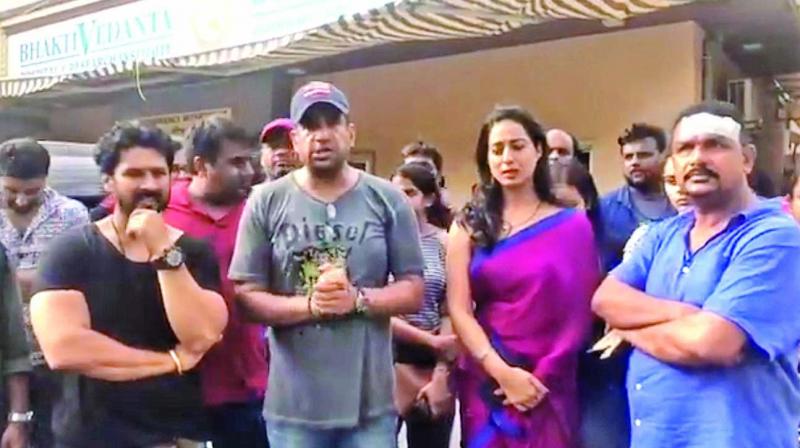 A screen grab from the video shared by Dhulia.

In a series of events straight out of a Bollywood potboiler, the cast and crew of a web series were allegedly assaulted on Wednesday. The team, which was shooting on a property in Mira Road, could have never imagined how painful the experience will turn out to be. Hours after they started shooting, a gang of goons descended on the set. What happened next could be a scene from a Tigmanshu Dhulia film, set in the badlands of Uttar Pradesh. “And to think that this happened in civilized urban metropolitan Mumbai,” says Dhulia who is an actor in this series, unable to get over the violence that he had seen. “When we saw this big gang of goons entering our location, we thought they were a part of another unit shooting nearby or maybe some tourists from UP who dropped in to watch the shooting. But they headed straight towards us and began brutally thrashing anyone they could lay their hands on,” recalls the director who was too stunned to react and stayed frozen on the spot. “I’ve directed many scenes of brutal violence. But nothing compares to the real thing. They savagely beat up our cameraperson Santosh Thundiyal. He had to get several stitches. Mahie Gill’s spot boy’s hand was fractured. There was chaos, blood and violence everywhere,” Dhulia shudders.

In a video shared by Dhulia, the show’s producer Sakett Saawhney says, “We have valid permissions, and had been shooting since morning. Suddenly around 4:00-4:30 p.m., some four drunk people came with sticks and rods and started beating our artists and technicians. They said this was their location and without their permission, we cannot shoot here. There was no scope for dialogue or discussion. They handled our women badly, they manhandled our artists.”

Mahie who is still in a state of shock recalls how she managed to escape the assault. “We were shooting since morning and all of a sudden, the goons walked in and started attacking. One of them came towards me but I managed to escape with my driver’s help. I managed to get into the car and I saw they were beating our director Sohum. When the DOP rushed to help them, he was also brutally attacked.”

Mahie adds, “I have been shooting in Mumbai for the last 10 years and have never faced anything of this sort. Yesterday was scary but more than fear, I was angry. We got to know many such problems have happened in this location but none of them took action. They are scared if they speak up they will be threatened. We met Devendra Fadnavis today and he assured that the goons will be punished. All the goons were caught last night.”

While there’s no clarity over the reason for the assault, Dhulia feels that if there was an issue with the shoot permission, it could have been resolved amicably. “We had the necessary permission to shoot. Maybe there was something amiss in the go-ahead required to shoot on that property. And those goons had been sent to vacate the property. If so, why suddenly come there and assault the unit? Is there no civilized way of dealing with such an issue? Is there no law to protect film units in Mumbai when they’re shooting on the roads of Mumbai? I am afraid Mumbai is no longer a place fit for shooting,” says Dhulia.