Bollywood celebrities on Friday joined in the celebrations and did their bit to raise awareness on the ancient practice. 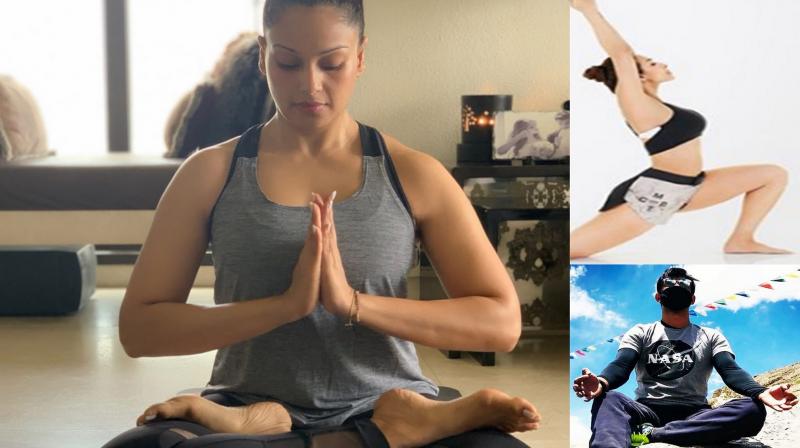 Mumbai: On the occasion of International Yoga Day, Bollywood celebrities on Friday joined in the celebrations and did their bit to raise awareness on the ancient and traditional practice.

Bollywood actor and yoga enthusiast, Shilpa Shetty Kundra performed and addressed a large crowd that had gathered to perform yoga in Mumbai.

She genuinely thanked Prime Minister Narendra Modi for his continuing efforts to support yoga and said, "I appreciate Modiji for taking the initiative to promote Yoga. I've been trying it for many years and Modiji has only made my work easier." "Yoga has benefited me in many ways and it is something I practice everyday and not just on Yoga Day. The younger generation is a single oriented goal focused youth who are breathing but not living the moment. I believe we should give time to ourselves for yoga. Yoga helps in enlightenment," she said.

The actor said that he had taken to yoga some 15 years ago after a health problem. "I started Yoga because 15 years back I had severe cervical spondylitis. I feel the mind is more powerful than your body and this is what Yoga has taught me."

"Yoga should be practiced as a daily lifestyle as it is a science and it is like a gift that belongs to India and that is what makes you proud," she added.

Yoga which finds its roots in India is now practised worldwide and more of the foreigners are taking the initiative to promote yoga in their hands.

Shilpa said, "Most of the foreigners are developing yoga apps and not Indians. Yoga should be promoted as it is India's find." "Let's take a vow to make Yoga a part of our lifestyle so that we can bring in a positive change and perspective to life," she said.

Bollywood veteran Anupam Kher too posted an image of him performing a yoga pose on Instagram. "Happy International Yoga Day to you all. "Let your whole body breathe." says my yoga teacher Mangla Duggal Ji," Anupam captioned the picture.

Actor-turned-politician Urmila Matondkar also shared an image of her performing a yoga asana amidst the hills on Twitter. Accompanying her picture with a quote from the Bhagwad Gita, she wrote, "Yogah citta vrtti nirodhah..Yoga Sutra 1.2 Patanjali Yoga is the journey of the self, through the self, to the self..Bhagwad Gita. Yoga is not religion, it's science of integrating body, mind and soul. Yoga day Every day and yet Happy International Yoga Day."

Actor Bipasha Basu too shared a picture of herself on Instagram doing yoga and captioned it "Happy International Yoga Day. Loved what Sadhguru said- Yoga is not just about twisting and turning... it's about existing in union with the rest of the creation. Have a wonderful practice. Have a wonderful day."

Actor-turned-author Twinkle Khanna also opened up about her journey with yoga in her Instagram post and wrote, "I started practising 15 years ago and though it took almost 7 years to kick in, I could feel a significant alternation-from being a cynical pessimist to becoming an optimist, tearing down established neural patterns to form the ones that fit the life."

"I have now -I would say it's largely due to doing my pranayama and meditation every day. These two books have been invaluable and have held on to them for over a decade. Yoga every damn day Yoga day."

Twinkle shared that she follows the principles of yoga and continued, "P.S I don't follow any Guru-just the principles of Yoga. Corruption is like rust, eventually creeps over even ironclad wills, which is why a book over a person perhaps :)"

Other Bollywood celebrities too celebrate yoga day. Take a look:

The idea of International Day of Yoga was first proposed by Prime Minister Modi during his speech at the United Nations General Assembly (UNGA) on 27 September 2014.

The theme of the 5th International Yoga Day is 'Climate Action'.