Some of the Bollywood celebrities too swear by yoga and give us yoga inspiration, also called yoga-spiration. 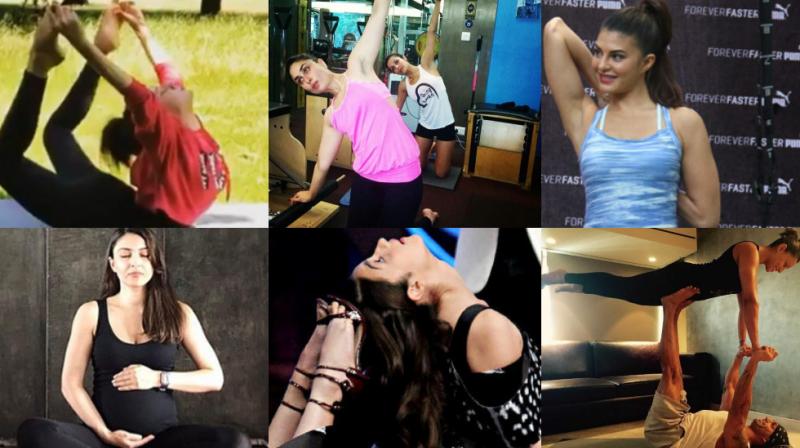 Fitness is as basic and important as living and breathing, and in order to remind us to keep fit and healthy, the world today celebrates International Yoga Day.

Some of the Bollywood celebrities too swear by yoga and give us yoga inspiration, which has been coined as yoga-spiration.

Apart from being known for her item songs and now hosting TV shows, Shilpa Shetty Kundra also launched a DVD on yoga, thus topping the list of our yoga-spiration.

Jacqueline is one of the fittest and hottest Bollywood actresses from the industry and some credit for that goes to yoga.

Monkey love did not become popular with Bipasha Basu and Karan Singh Grover just like that. They work out together and are flexible like monkeys.

It isn’t hidden that Kareena’s day starts with pranayam, a yoga exercise, which keeps her fit and going throughout the day.

When Kareena can take up yoga, how can her best friend and also one of the hottest females in Bollywood, Malaika Arora, stay behind?

Kangana too follows the path of yoga and the proof of it was provided in the morning itself.

Post turning a mom, Rani has taken to yoga in order to keep herself healthy yet again.

Like Shilpa, Lara Dutta Bhupati too came up with her own fitness DVD which was proof enough that she has lost weight through yoga too.

Despite being pregnant, Soha Ali Khan did some intense yoga and gave us fitness goals with the same.