Sonam bagged much attention at after party in Abu Jani and Sandeep Khosla couture. 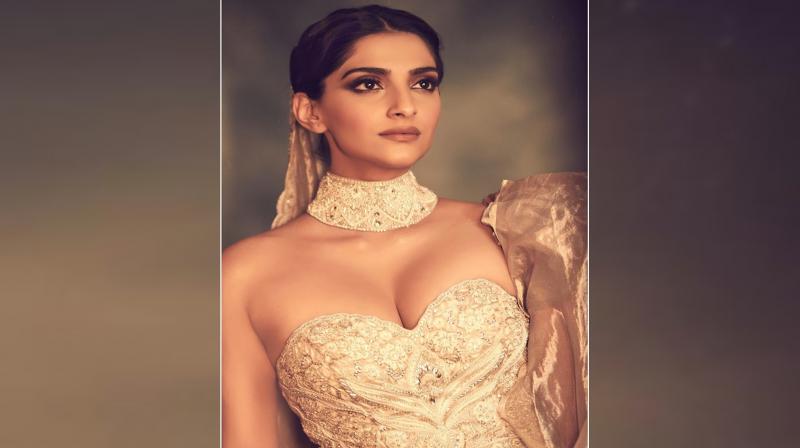 Cannes: After totally slaying at the Cannes red carpet in her red exquisite gown, Sonam Kapoor Ahuja looked all royal and stunning in an eye catchy gold outfit for the Chopard party.

Sonam who knows how to carry style made heads turn and bagged much attention at the after party in her Abu Jani and Sandeep Khosla couture. Giving a modern day touch in her outfit, the 33-year-old actor is seen in a gold dress with a touch of vintage in it. The star completed her look with a beautiful matching choker.

The 'Neerja' actor had put on subtle makeup with hair tied into a bun. Sonam posted her look on her Instagram and wrote, "For the Chopard lanuitdesrois dinner party in Abu Jani Sandeep Khosla."

Designers Abu Jani and Sandeep Khosla were quick enough to post some close shots of the look of the fashionista on their Instagram stories.

The diva made a stunning entry at the red carpet where she was seen flaunting her ravishing red outfit. She looked gorgeous and grabbed eyeballs in the red dress by Valentino. She opted for 'fresh face makeup' with nude pink lips and beautiful eye makeup to round off her look. The actor posted four pictures.

Last year the newlywed Sonam aced the red carpet event with her gorgeous looks. Donning chooda and Mehendi, she had heads turn as she wore a Vera Wang couture beige gown for her second red carpet appearance.

The actor known to shine with some cultural subtleties in her outfits is making the wait unbearable for her 2019 red carpet avatar. 72nd Cannes Film Festival which started on May 14 has seen a string of Indian celebrities making their red carpet appearances. Bollywood divas who have ascended the red carpet so far include Priyanka Chopra, Deepika Padukone, Kangana Ranaut, Huma Qureshi, Diana Penty, Hina Khan and Aishwarya Rai Bachchan.

The festival will go on till May 25. Meanwhile, on the work front, the actor was last seen in the film 'Ek Ladki Ko Dekha Toh Aisa Laga'.