Entertainment   Bollywood  21 May 2018  Taapsee Pannu reveals why she has never planned to foray into any 'wood'
Entertainment, Bollywood

The actress, who has worked in Bollywood and in South film industry, reacted if she had plans to enter Hollywood. 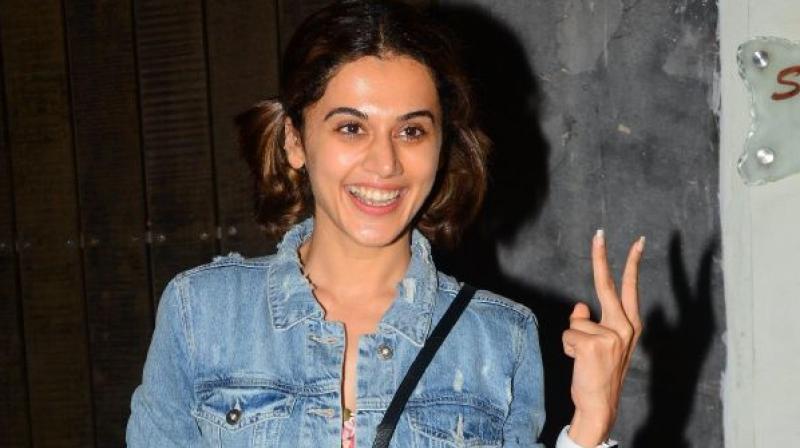 "I have never planned to foray into any wood. I didn't have plans to foray into the film industry, forget about Hollywood, South or Bollywood. It just happened organically," the actress told PTI.

However, if she gets an opportunity in Hollywood which is worth putting effort and time, she would explore that, but would never approach anyone with her profile in hand.

"It's not like I am anything against working in Hollywood, and it's also not like that I am going to go there with my profile searching for work," she said.

When asked whether Taapsee would approach Hollywood with her profile if she finds a good project, Taapsee said that she already has several films in Bollywood, and she is being cast in variety of roles.

"I am already content here. I am getting wonderful roles here. I am doing all kinds of role I have thought of...That is why I am not feeling that hunger to go to Hollywood," she added.

Commenting upon the comparison between Bollywood and Hollywood, she said Indian film industry is moving in the right direction.

"We can't keep comparing it to Hollywood, the resources in Hollywood are of very high standards," Taapsee said, adding it is very difficult in Bollywood to put that much amount of effort, money and time on making movies.

About her upcoming movies:

Taapsee said that 2018 is a very "decisive" and "eventful" year for her as she is doing three totally different movies.

"This year will be quite eventful for me. I have 'Soorma', 'Mulk', and 'Manmarziyaan'. They are extremely different from each other. One is a hockey-based biopic, other is a social thriller and third is an intense love story. All different characters. So for me, 2018 is going to help me to know how much the audience love me. So, 2018 will be very decisive for me," she said.

About her new business venture:

The actress, who already runs a wedding planner company along with her sister Shagun Pannu, would be announcing her new venture.

"The existing venture is pretty much stabilised in terms of turnover, and I am working on a new venture which I won't disclose now. It also has nothing to do with films. It will be totally disconnected," she said.

Taapsee said that as she is a "moody" person, she never knows when she will quit from Bollywood. "If my films are not working, my audience don't want to see me, I will decide to leave this and do something else," she added.

"My box office success will tell me, when I will be quitting," she said.