RAW has excellent technicians. My character is that of one working in a government intelligence department. 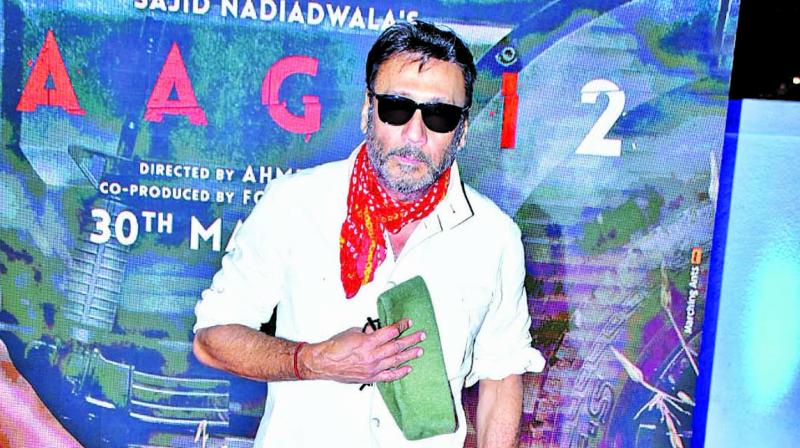 Jackie Shroff is busy promoting his film RAW (Romeo Akbar Walter). During the interaction, he reminiscences about his early days, talking about Tiger and daughter Krishna and expresses his wish of doing the remake of  ‘Ram Lakhan…and reminisces on those days when residing in a chawl at “Teen Baati” he would sit and listen to cricket match.

“Yes, I remember in those days there was one Omar Kaka ….who had a radio and we would all sit down together and listen to the commentary on the radio. But now times have changed and now there are so many platforms for all of us to watch films and listen to radio – even while driving a car.”

Jackie is one actor who believes  in being as fit as a fiddle: “Yes boss, one need not feel old at all. According to me, you never need to feel old. Until  40 you are like a bachcha and at 80 you attain youth-hood.

Look at Dharm Sahab (Dharmender) — at this age also he looks so healthy, fit & fine. Looking at him, I still love to feel I am young enough. At times I feel like kicking the football hard. But I try to keep my mind and heart in control. Nonetheless I usually like to keep  my bones fit and so I try kicking a football within limits and thus let my bones feel a little pain, this can keep them fit.”

Talking about his son Tiger, Jackie says, “When he was born and grew up a little, I first tried ‘Monkey Jumping’ with him. Later, I put him on to skating. I then left him all by himself as I could notice that Tiger learned the balancing act quickly.”

About daughter Krishna: “Krishna is keen on sports. She is teaching basketball to schoolchildren and has opened her own martial arts  gym. She is an all-rounder and loves to participate in football.

All praise for director Robbie (Grewal): I am happy that he is efficient in his craft. He executes every scene par excellence. Also works in a calm manner. He is a man of few words and not a ‘bolbachchan.’

RAW has excellent technicians. My character is that of one working in a government intelligence department. After the film Border this is another great character that I am playing on screen. I love to play [role] in stories of unsung heroes.

You guys need to watch the film RAW. I am happy that I was lucky to have been in this profession. And more lucky that until today I am getting to work .’

Talking about his film, “Prasthanam” Jackie gushes about his adaptability: “I am jumping …doing bike stunts etc. This I credit to my adaptability trait. I do what my action directors ask me to do.

Also I am working in the film Saho and am happy to be associated with such a huge filmmaker and star cast .

I am the opening batsman in most of the films. In Bharath I play Salman Khan’s dad. I still remember when Salim Sahab was writing the dialogues of our film Falak, I had first met Salman Khan who had visited the sets with his dad [Salim Sahab]. Working with him feels great.

Jackie Shroff wishes to do some exercises to bring back his aura of the ‘80s and ‘90s and would love to play Ram: Anil will never allow anyone to do his role in Lakhan.  So needless to say I and Anil will fit the bill.”