Entertainment   Bollywood  21 Jan 2018  This is how Ranveer Singh owned the spotlight at Filmfare Awards 2018
Entertainment, Bollywood

Ranveer made a solid impression at 63rd Filmfare Awards with a printed suit which had poster motifs of his favourite films. 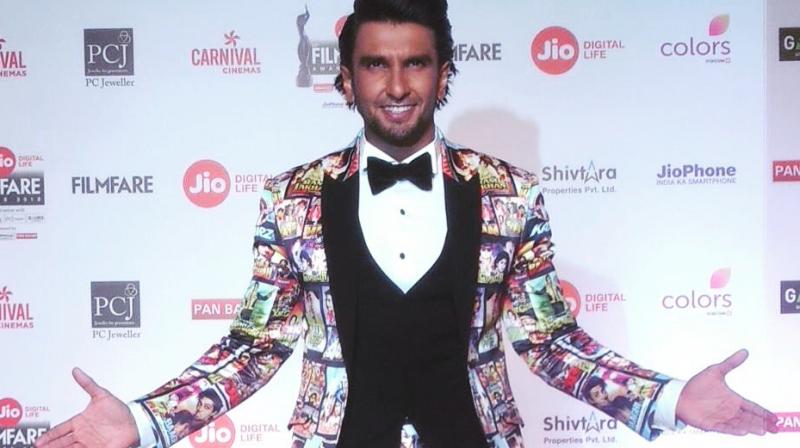 Mumbai: Ranveer Singh’s quirky sense of fashion was once again a talking point for everyone at recently concluded 63rd Filmfare Awards. The ‘Padmaavat’ star managed to be a centre of attraction at the award night with his ‘different’ printed suit. Ranveer's suit had poster motifs of his favourite Hindi films such as Dayavan, Ajooba, Deewar, Ram Lakhan, Baazigar, Jaadugar, Ghayal, Aankhen, Vastav and many others others.

Ranveer Singh's whistle worthy performance with none other than Akshay Kumar.

Ranveer Singh rocked the stage with an amazing performance with Manushi Chhillar and Shah Rukh Khan. Looking at their great chemistry together, we hope some Bollywood filmmaker cast them in a film together.

Ranveer and Manushi clicking a cute selfie together during the practice session of their performance.

Ranveer Singh also performed at the Filmfare Awards, held in Mumbai last night. The actor's much awaited 'Padmaavat' opens in cinemas this week. He will be seen as menacing Alauddin Khilji in Sanjay Leela Bhansali's period film.