After TOH's dismal run at the box-office, the theatres are reportedly looking to obtain 50% of their investment compensated from YRF. 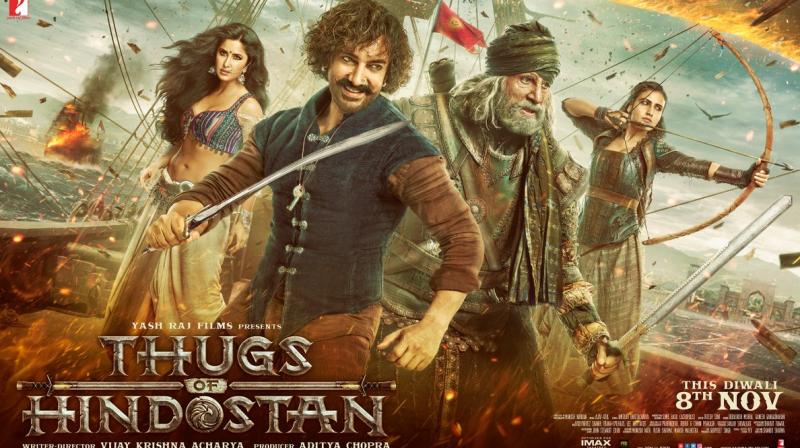 Mumbai: Aamir Khan and Amitabh Bachchan starrer Thugs of Hindostan is still struggling at the box office in its second week. The YRF produced epic-adventure drama had a gigantic opening day with a collection of Rs 52.25 crore. However, as the number of negative reviews and dull word-of-mouth started kicking in, the film witnessed a huge downfall in collections on the second day and continued the downward trend at the box-office. Its total collection presently stands at Rs 145.95 crore. Made on the estimated budget of Rs 300 crore, the film is declared as 'epic disaster' by trade.

Exhibitors have lost out on over 50% to 60% of their investments on Aamir Khan starrer. The film which was initially released across 5000 screens in India have now been reduced to 1800 screens across the country. According to a Mid-Day report, the theatre owners are now asking for compensation.

The theatre owners are reportedly looking to obtain 50% of their investment compensated from the makers. “As is the practice with YRF, the studio had taken on the distribution responsibilities. The exhibitors agreed to the minimum-guarantee deal as they expected handsome profits from the big-budget film, but the tables have turned. So, we are planning to approach the sub-distributors (YRF) to get a refund. We hope YRF, Aamir Khan and Amitabh Bachchan will help us in this situation, else there is a possibility of a few theatres having to even shut down,” an anonymous exhibitor told Mid-Day.

In the past, superstars like Shah Rukh Khan, Salman Khan and Rajinikanth compensated distributors after their films tanked the box office. Shah Rukh gave refunds for the failure of Jab Harry Met Sejal and Dilwale, Salman for Tubelight and Rajinikanth for Lingaa.

Thugs of Hindostan is based on Philip Meadows Taylor's 1839 novel 'Confessions of a Thug' and is about a gang who posed a serious challenge to the British Empire in India during the early 19th century.