Bollywood stars get back to work

Kareena, Ranbir, Ayushmann, Anil and others face the camera again 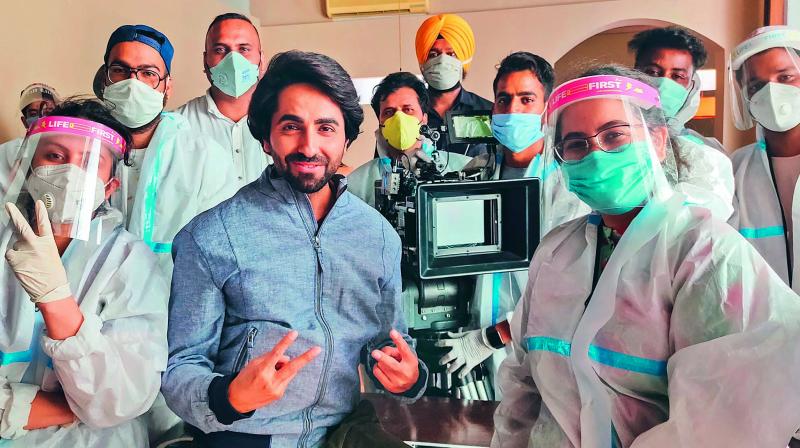 Kareena Kapoor Khan, who recently announced her second pregnancy, has started shooting again. Naina Sawhney, Bebo’s hairdresser, has come out with a picture of the actress and her favourite make-up artiste, Pompy, in what is reportedly the latter’s residence.

Kareena’s cousin Ranbir Kapoor too is back in action. His photographs with his make-up artiste Ajay Kaloya went viral as his fan clubs shared them.

Another Kapoor was spotted at Versova on his way to shoot a commercial for a music app.

“Anil is expected to be back on the film sets very soon,” says a trade source.
Meanwhile, Ayushmann Khurrana will start shooting his new film in October. Ayushmann says, “I have shot multiple things at my hometown and it has been super smooth, shooting with the crew who are also based in Chandigarh. It’s refreshing to be on the sets, working after so many months. It took some time to get used to and control the paranoia around the virus, but I think I’m fully focussed to work now, of course with all safety measures.”

The actor feels, “We have to all work towards restarting our industry,” and he’s glad to have taken a step in that direction.

As we reported earlier, Yami Gautam and Sonakshi Sinha are back at work too. Yami was shooting for what she described as a ‘secret’ project. Actors Gumeet Choudhary and Sayani Datta are now in Jaipur to shoot the remaining parts of the horror film, The Wife, backed by Zee Studios.

Kunal Khemmu went to Nashik recently to shoot for the second season of his web-series, away from the maddening Mumbai crowds. Dangal girl Sanya Malhotra shot for a chocolate brand, stepping out of her parents’ home in New Delhi.

Like Raveena Tandon who shot for a sanitiser brand, she was happy that the entire crew was in PPE suits. Vidya Balan and Taapsee Pannu put on the greasepaint a few times recently, and Preity Zinta posted pictures of her make-up session in progress.“It feels like we were all making movies in another lifetime,” sums up Ayushmann.