Director Amit Masurkar has pulled off a feat thanks to the screenplay by Aastha Tiku that is political, intelligent and very well researched 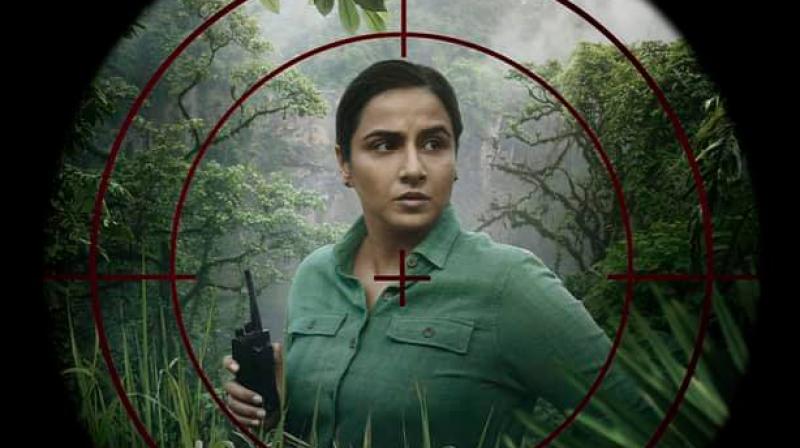 Sherni has a very simple story: An aadam-khor tigress is on the prowl under the jurisdiction of the Bijaspur Van Vibhag in Madhya Pradesh.

The forest department has to tranquillise and capture her and then release her in the national park. Or, it has to goad her passage into the wild, away from the humans she is threatening.

Writer Aastha Tiku and director Amit V Masurkar take this guileless story to plot a survivor thriller that courses through the treacherous terrain of a nation that is self-sabotaging.

Sherni's screenplay is woven with India's reality, which is irony in perpetual motion. We get a macro and micro view of the ecological destruction that is taking place, one crisis, one government scheme at a time. While making plans to save the environment, contracts are given out to plunder and profit from it. Forest cover, animals' habitat, people's lives and livelihoods — all are under threat in a deadly cycle of devastation and superficial patch-ups that is made unending by electoral politics.

Amit Masurkar’s 2017 Newton was a sharp commentary on India's claim to be a republic. It had a snarky screenplay that looked for the absurd as the dance of democracy played out between the officious and the bewildered. Packed with fast and crackling dialogue, its excellent performances have stayed with us because the film made us think while we laughed.

At many levels, Sherni and Newton are similar in their concerns and setting.

The characters it front-lines, the names and jobs assigned to them are a delightful leap from how Christian and Muslim characters are often portrayed by Bollywood.

There is an interfaith marriage, a married woman who doesn't want kids, a biryani meal shared by all and politicians baying for blood as they play politics over dead bodies.

But Sherni plays out in a more frugal landscape of events, characters and dialogue. In fact, at times Sherni feels like a van vibhag documentary. And that is not just because its pace seems to be in step with bureaucratic indolence, but also because while Sherni has  one set of characters created with love and respect — especially the ones assigned to “stars” — the other lot are stock characters.

Another problem is Sherni’s inability to laugh at itself. It is a little smug and in love with its own virtue.

There is a clear pecking order in the Bijaspur Van Vibhag.

In the office, Bansal (Brijendra Kala) sits on top and is close to the unctuous contractor incharge of the upkeep of the forest. Incompetent and uninterested, Bansal ignores lapses because the contractor's jijaji is the local legislator.

Divisional forest officer Vidya Vincent (Vidya Balan), a South Indian Christian, reports to Bansal. She is no longer charmed by her sarkari naukri. It's been nine years and there doesn't seem to be a promotion in sight, she tells her husband over a video call.

Always at the service of the resource-strapped van vibhag is a zoology professor from a local college. Noorani (Vijay Raaz) understands animal behaviour, cares for them and wants to help.

On top of them sit several people.

The big babu, Nangia (Neeraj Kabi), who has a cultivated manner and grey beard. He seems to be cynical but learned, intellectual but also well networked. This package of false impressions feeds his inflated ego and hides a withered spine.

Then there is Rajan Rajhans urf Pintu bhaiyya (Sharad Saxena) who runs a retreat nearby. He calls himself a conservationist but is a hunter looking for his next kill.

On top of them all are politicians of various hues and clout.

Close to the bottom is T12, the man-eater of Bijaspur.

And squished right at the bottom, below T12, are the trapped villagers -- forced to take their cattle to a particular patch of jungle because the traditional grazing ground is now a profitable teak plantation that the government is proud of.

Vidya Vincent is focused, upright but low-key in the way women often are in a system populated by men with fragile egos.

Assembly elections are underway and after two villagers are killed, the man-eater becomes an election mudda between two rival candidates. One promises to kill the tiger and save people, the other lies about a third death.

Passions are roused over dead bodies, officers are attacked, a jeep is burnt and a hawan is organised in the office to predict who will triumph -- the tigress or Bansal.

The threat to T12 rises from within the system that is working at cross purposes. While one lot sets out to capture and release her, the other lot is armed and keen to kill because elections have to be won...

It is easier to "act" when there is action, lots to do, heavy dialogue to maaro. Actors can rehearse and train for it.

It is also relatively easier for actors to have a trait, a stand-out emotion they can project.

Balan plays a married woman and a female officer with the glory of commonness.

She is measured, believable and warm. She fits seamlessly in the officious entourage and yet she stands out as she carries Sherni's roaring politics with quietude.

Neeraj Kabi is excellent as the posturing, lecturing, creepy narcissist. As the one who gives hope and then smashes it, he becomes symbolic of all that is wrong with the "system".

Vijay Raaz and Brijesh are talented but are also given to overacting. Here they give restrained performances.

Director Amit Masurkar has pulled off a feat thanks to the screenplay by Aastha Tiku that is political, intelligent and very well researched. There isn't much action and yet the film says a lot.

Sherni is also cinematically simple, with a few flourishes thrown in for our joy.

In Sherni, females populate all spaces — the office, the field, the village, the jungle — and the casting is nicely done. They all seem to belong to the spaces and roles assigned to them. The problem is that most remain part of the landscape and never come alive.

Like Sharat Saxena. He is not bad. But there is something about his presence, his oily, bahubali act that, together with the two rival politicians and the villagers, feels reductive and strikes a stale note.