Actors Mahie Gill and Shabir Ahluwalia are a part of the show. Only Gill was shooting when the alleged incident took place. 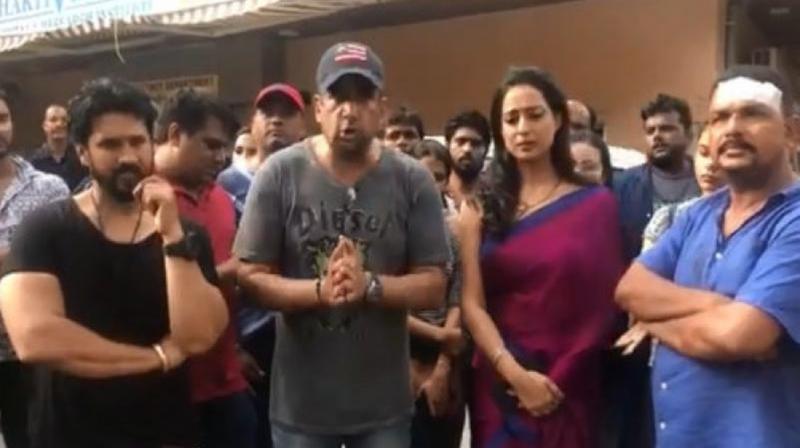 Bollywood director Tigmanshu Dhulia said he was present when the attack happened and called the incident 'pathetic'. (Screengrab from the video tweeted by @dirtigmanshu)

Thane: Three persons have arrested for allegedly misbehaving with the cast and crew of ALTBalaji's upcoming web series 'Fixerr' here on Wednesday.

An FIR has been lodged at Kasarwadavali police station against the three accused -- Rohit Khandelwal, Krishna Sona, and Sonu -- for grievously hurting the crew and illegally gathering at the shooting location.

The accused have been charged under different Sections of the Indian Penal Code (IPC) including 326 (voluntarily causing grievous injury). Actors Mahie Gill and Shabir Ahluwalia are a part of the show. Only Gill was shooting when the alleged incident took place.

According to Sakett Saawhney, producer of the show, the team had valid shooting permission, but some drunk goons disrupted them and attacked the crew. "We were shooting in a factory with valid permissions since 7 am. Suddenly around 4 pm some drunk goons came with sticks and rods and attacked our artist, technicians, and crew. They said that this is their location and we cannot shoot without their permission," said Sawhney.

Gill said that as soon as the goons came near to attack her, she immediately ran towards her car and locked herself inside and "saw the rowdy people hitting crew members like animals."

"This is the first time I have seen people hitting in such a cruel manner. DOP (director of photography) Sir has got stitches on his head. Soham, our director, was beaten so badly that he literally fell on the ground. As the DOP Sir intervened in between to protect Soham, they started beating him even harder," said Gill.