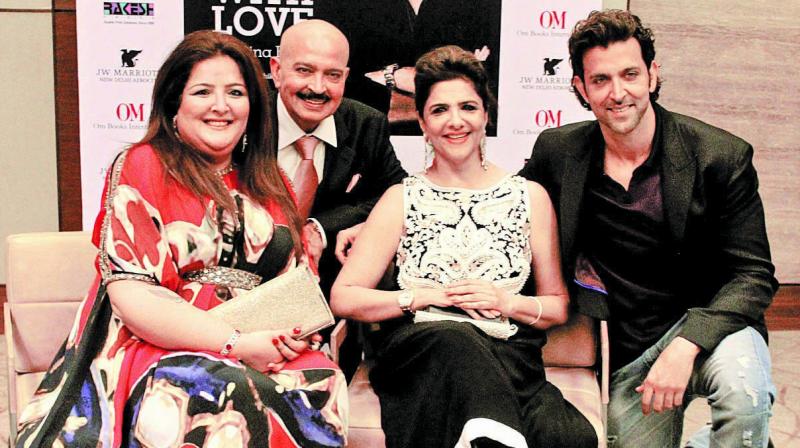 Earlier, it was also reported that Sunaina had been admitted to a hospital for bipolar disorder but she clarified that.

The crisis at Rakesh Roshan’s home has now become a public spectacle with daughter Sunaina Roshan’s show of support for her brother Hrithik Roshan’s nemesis Kangana Ranaut. While Hrithik is going about promoting his upcoming film Super 30, father Rakesh Roshan who recently recovered from a serious illness is severely shocked and stressed by his daughter’s behaviour. Adding fuel to the raging fire is Kangana’s sister Rangoli who claimed that Sunaina has confided in Kangana about the Roshans physically assaulting her. In a series of tweets, Rangoli stated, “Sunaina Roshan is asking Kangana for help, her family is physically assaulting her because she is in love with a Muslim man from Delhi. Last week, they got a lady cop who slapped her... her father also hit her.... her brother is trying to put her behind bars... I fear her dangerous family might harm her, we want to make this public because Sunaina calling Kangana and crying all the time, Kangana doesn’t know how to help her.”

Earlier, it was also reported that Sunaina had been admitted to a hospital for bipolar disorder but she clarified that she had been to rehab for alcohol abuse, but not any mental illness. She had also dropped hints that all is not well with her family.  Sunaina’s battle with depression has been documented in a blog she sporadically writes. The 47-year-old has been through several ups and downs, dealing with broken marriage, diabetes and hypertension and was also diagnosed with cervical cancer a few years ago. In an interview to a daily last year, she had also spoken about seeing a counsellor for her depression and how her family had rallied around her through her difficult days. Says a source close to the family, “The family has been trying to help her but she refuses to seek any help or advice. Since she wanted to live independently, they even bought her a house in Chembur. But because of her lavish lifestyle, she is struggling to meet ends.” Sources also say that her father’s strict approach hasn’t gone dow
n well with her. “This is not an easy time for Rakesh. He is still recovering from his illness. His son’s estrangement from his wife still hurts Rakesh,” says another source.

While the family has refused to comment on the issue, Rajesh Roshan’s son took to social media to clear some air. “It’s sad to see how people can stoop this low as to use a vulnerable period of the family for their own ends. Even if there is a family crisis, Didi has the law and order machinery of this country for her,” wrote Eshaan Roshan, while questioning Kangana and her sister’s interest in the family issue. “Why are these sisters obsessed with this family?  My bade papa is undergoing a health crisis, Didi is vulnerable. It’s a very sensitive period for our family. I request these people to be sensitive and not act as vultures,” he added. His thoughts are seconded by another close friend of the family who says, “Family matters should be solved in closed doors. It doesn’t seem right to publicly put up a fight and putting each other down. Rangoli should also be careful about posting anything about Sunanina and her family as it is an extremely sensitive matter.”

With the crisis within the Roshan family deepening, close friends are at a loss as to how to help the situation. A very old and trusted actor-friend of Rakesh Roshan said, “I am very concerned about what is happening to them. But I don’t know how to help. This is a very private family matter. Sunaina needs help. What kind of help, I don’t know. No normal child would cause so much suffering and pain to their parents. Rakesh is in deep anguish. He has been deeply worried about Sunaina’s life, illnesses and relationships for years now. She feels her parents don’t care for her. But this isn’t true. I am very worried about what this stress would do to him.”

—With inputs from Subhash K Jha