Hrithik's sister Sunaina's phone is off, I'm scared for her: Kangana's sister Rangoli

She also claimed that Sunaina's number was not reachable and that she was scared for her. 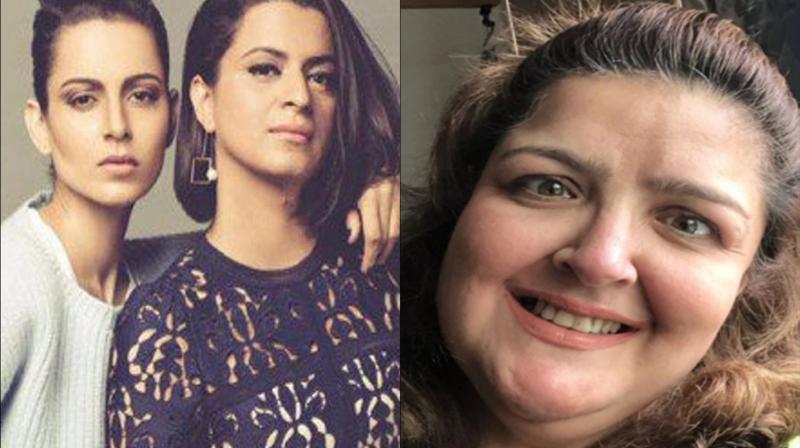 Rangoli accused the family of physically assaulting Sunania for being in love with a Muslim. (Photo: Instagram)

New Delhi: After making some shocking allegations against Hrithik Roshan's family on Wednesday, Kangana Ranaut's sister Rangoli Chandel on Thursday alleged the family was torturing Sunaina (Hrithik's sister). She also claimed that Sunaina's number was not reachable and that she was scared for her.

In a series of tweets, Rangoli alleged the family made Sunaina dependant on them and now when she is in her 40s they have stopped supporting her financially. She claimed that Sunaina was married at a young age of 16 and does not have any educational qualification.

You are not being fair @SumitkadeI , she lives in their house, she was always made to be dependent on them now suddenly in her late fourties they have stopped to give her any expenses. She was married of at the age of 16 she doesn’t hold any degree or education....(contd) https://t.co/BPe7iOzxFK

She further asserted that there is no use of seeking help from police as Hrithik's father Rakesh Roshan has "strong connection" with them.

(Contd).... also going to cops isn’t easy Kangana dealt with them and these cops directly call Rakesh Roshan they have such strong connections...(contd) @SumitkadeI

She alleged that Sunaina is being tortured and asked people not to judge her.

(contd)....They’d put crime branch behind Kangana also woman comission refused to take her complain she was Rakesh’s friend, they torture her in that house. Please don’t judge her 🙏 @SumitkadeI

In another tweet, she claimed that Sunaina's phone was not reachable.

Right now my biggest worry is that Sunaina’s phone is off and she is not reachable, God knows what they are did to her ... i am really scared for her ...

On Wednesday, Rangoli accused the family of physically assaulting Sunania for being in love with a Muslim. Rangoli also claimed that Sunaina has sought Kangana's help in the matter.

A few days back, Rangoli slammed Sunaina in a series of tweets where she wrote how Sunaina constantly messaged the two sisters apologising for not standing up for them when her brother Hrithik accused Kangana of suffering from bipolar disease.