Entertainment   Bollywood  20 Jun 2018  Not just Gauri, Suhana’s pics with her close ones at college prom are super glamorous
Entertainment, Bollywood

Not just Gauri, Suhana’s pics with her close ones at college prom are super glamorous

The star kid’s glamorous avatar was impressive at her college prom night, which has been going viral on social media. 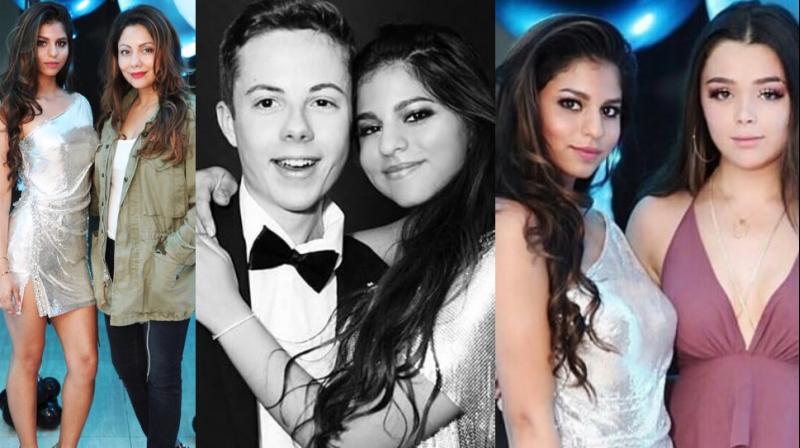 Suhana Khan with Gauri Khan and her friends at prom night. (Photos: Instagram)

From being referred to as the superstar’s little one for years, today her glamorous avatar is what is talked about, amid an ‘impending’ Bollywood launch.

Suhana officially became an adult recently, celebrating her 18th birthday on 22 May.

If that was an important step in her life, there’s another one awaiting her.

The star kid will complete the first major step in education this year.

With the final year coming to an end, her college, Ardingly in Sussex, London, held a prom night for its students recently.

Gauri had shared pictures from the night few days ago, showing how Suhana was partying and enjoying the final year at school.

Everyone noticed how stylish she looked in a silver one-shoulder silver dress as she posed with her mother.

Even SRK shared one of the pictures going gaga over the ‘ladies.’

Was reading and came across this line....’ Life doesn’t come with a manual, it comes with a mother ‘ and then this picture of the ladies...sach hi hai!!

Now, some more photographs from the night have made its way to social media, which have been going viral.

She is seen posing with her friends, but one of them where she is posing with a young man surely caught our attention.

We don’t want to speculate, but Suhana looked lovely smiling in the company of the youngster while holding him around his shoulders.

The guy seems to be her prom partner for the evening, and we wish we could’ve got our hands on pictures or videos of them arriving together or perhaps ballroom dancing.

With so much glamour, we don’t have any doubts about the youngster fitting in the world of Bollywood.