Veteran actress who met with a accident on Saturday afternoon is now being looked after at Kokilaben hospital. 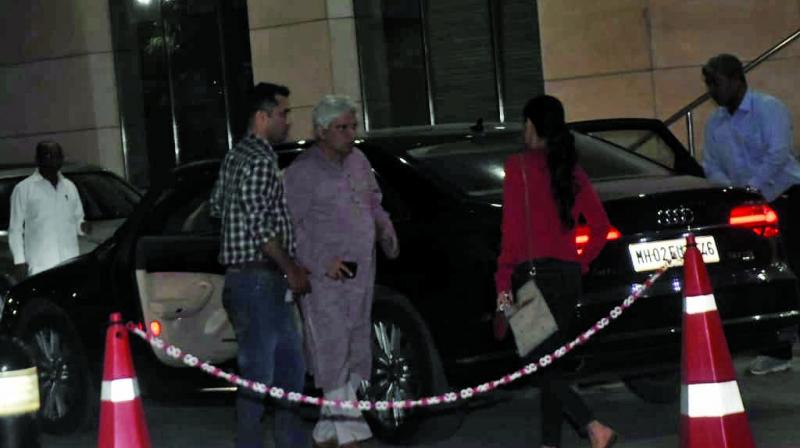 Javed Akhtar at the hospital

A day after the ghastly road accident which left her SUV smashed, Shabana Azmi is doing fine at the Kokilaben Dhirubhai Ambani hospital in Mumbai. On Sunday all essential medical tests were done and no seeming complications were reported.

When inquired Javed Akhtar about his wife’s health on Sunday morning, he replied, “Don’t worry. She is in the ICU but all the reports are positive. It seems there’s no serious harm done.”

In the meantime, the police have filed an FIR against Shabana Azmi’s driver for rash driving. Says a source very close to the Azmis and Akhtars, “Just a few days earlier, we were all celebrating Javed saab’s 75th birthday. Now, this catastrophe has struck. Though it could have been much worse.”

According to the source, Shabana had a providential escape from death. The intensity of the hit could have hurled her out of the speeding vehicle. Luckily, that didn’t happen. But it will take her more than a month to recover.

As soon as the veteran actress was shifted to Kokilaben hospital, Tina Ambani came in to personally supervise the shift and made all arrangements. All the senior doctors and specialists were called in to monitor Shabana’s progress. Seen at the hospital to visit the actress were Tabu, Farhan and Zoya Akhtar, Anil Kapoor, Shankar Mahadevan, Satish Kaushik and Salma Agha with daughter.