Mallika Sarabhai’s ‘Svakranti –The Revolution within’ is about an imagined conversation with Mahatma Gandhi using multimedia, theatre, music & dance. 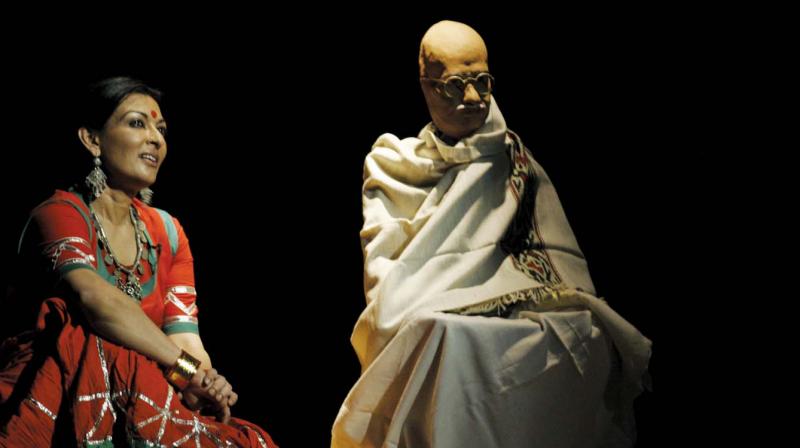 Mallika Sarabhai in conversation with Gandhi

When Mahatma Gandhi wrote his unusual autobiography ‘The Story Of My Experiments with Truth’, it inspired many lives to follow the path of non-violence and truth. His ideologies have never been questioned. However now, almost after 70 years of his death, veteran classical dancer and actress Mallika Sarabhai questions the relevance of this path today as she appoints herself to advocate for all the women who have struggled non-violently with truth through ages.  Her latest 60-minute performance ‘Svakranti –The Revolution within’ at NCPA is a personal journey that delves into the lives of women seekers of truth. “It’s a very personal journey and I am standing to fight for what I conceder is justice for Indians,” says Mallika.

Having an imagined conversation with Gandhi in the performance, Mallika questions whether he ever regretted saying that his life is his experiment with truth and if it is worth fighting for truth. She also brings forth all the women at the age of 90 participating in the Satyagraha with him and asks if Gandhi knew all of them. “It is a fight for nation’s identity and it is not about idealism alone, because one leads public and private life,” she explains. She ends the performance with a discussion of questions, which are real for her and many women who have been struggling throughout.

For Mallika, Gandhi’s ideologies have been part of her life and have a pervasive influence on her families. “Gandhian non-violence is in my DNA,” smiles the actress. Over the four decades, the actress has been fighting for social justice and women empowerment non-violently through her performances which have women issues as themes. For Svakranti too, she chooses women’s plights to take the centre stage. “There is a need for it, I am a feminist and I think unless feminism takes the centre stage, the world will remain the kind of degraded and exploited world that we live in,” she asserts. Adding that she has to fight more and more as the positions have been hardened over 30 years than adjusted, “we have regressed in so many ways in India.”  The actress wishes her work to become irrelevant with time because the world has changed so much, though, to her surprise, it remains more relevant. “Women’s issues and problems have become more deep-rooted over the years and unfortunately my work is still relevant,” she rues.

With her interactive and effective performance like We… and Sita’s daughters, Mallika has always been experimenting with new forms and techniques. For Svakranti too, Mallika has infused multimedia techniques along with theatre and various dance forms. Though experimenting with performances is never her agenda. “I start off by using the best method of communicating for what I want to say, and for that, if I suddenly have to learn a new skill, I learn it,” she insists. When asked if the multimedia is overpowering the performing arts, she says her use of technology is just like an additional dancer or a costume in the performance, “We have used it in a way that it becomes integral part of the performance,” confirms the actress.

Over four decades of her performing life, the actress and Bharatnatyam dancer has evolved a lot and now she is going back to the roots. “I am falling for the sophistication and power of Bharatnatyam because I see much more strength and possibilities in tradition,” she signs off.