Confirmed: Sanjay to play gangster, Farhan an assistant director in Ajay's next

Ajay is excited about his production, which will be directed by Nishikant Kamat, with whom he worked in the 2015 hit thriller 'Drishyam'. 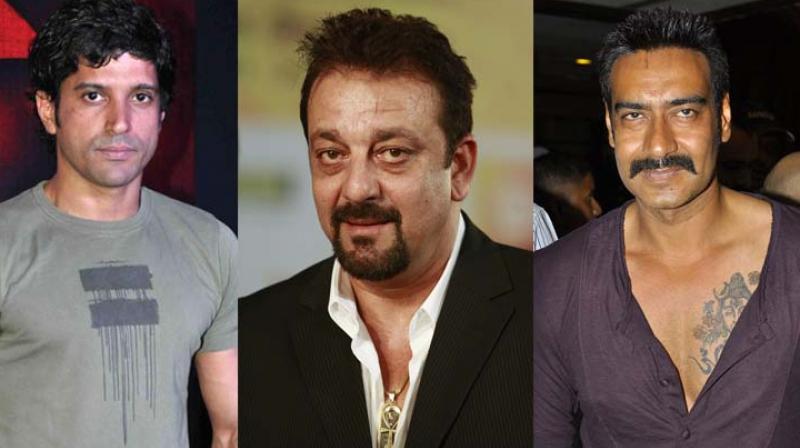 Mumbai: Ajay Devgn says Farhan Akhtar and Sanjay Dutt will play an assistant director and a gangster respectively in his next home production, a remake of National Award winning Tamil film 'Jigarthanda'.

Ajay is excited about his production, which will be directed by Nishikant Kamat, with whom he worked in the 2015 hit thriller 'Drishyam'.

"I am producing the film and we are working on the script. It will start in January-February. It is inspired from Tamil film 'Jigarthanda' (released in 2014). It is a fabulous story. It is not going to be an exact copy of the film, we will change things. But at the same time, quite a lot of stuff will be similar," Ajay told PTI.

The film will star Farhan Akhtar and Sanjay Dutt in lead roles. Reportedly, the premise of the original film was based on an assistant director (played by 'Rang De Basanti' actor Siddharth in the Tamil version), who gets fired from a reality TV show. He then decides to make a film on real-life gangster Assault Sethy (played by Bobby Simhaa).

"I was too occupied with work and I felt Farhan and Sanjay were apt for the film. It is true that Farhan plays an assistant director and Sanjay a gangster. This premise will be the same in terms of their role," Ajay says.

"I have a production house. We are making some five-six films, so I can't do all the films. I have to be honest to the story and cast actors who suit the parts. My intention is to stay true to the story."

Ajay says the team is working on the script and once it is done, they will think of an actress.

Meanwhile, the 'Singham' star is looking forward to the release of 'Golmaal Again' on October 20.