Watch: Salman lends voice for character of Hanuman in the quirkiest way

In the trailer, we see him saying ‘Ek baar jo maine commitment kardi…’ and ‘hataa sawan ki gatha, what about my katha’. 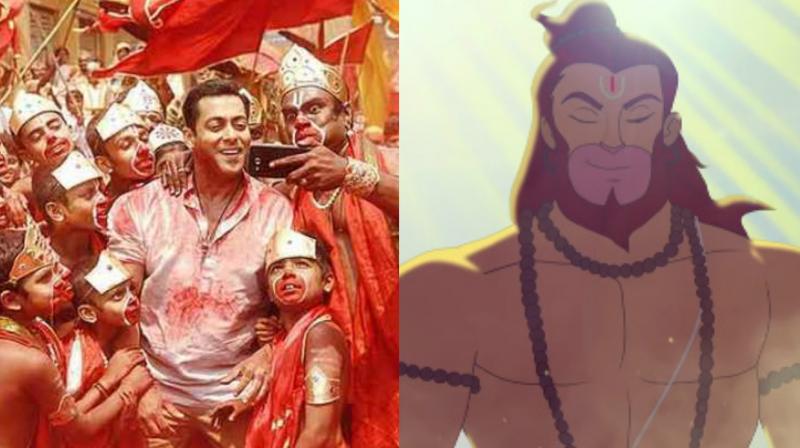 Mumbai: Bollywood filmmakers have always been interested in making films on mythological characters, with reports doing the rounds that 'Baahubali' director S S Rajamouli is planning to make a film on the 'Mahabharata'.

But there is no doubt that the mythological character of Hanuman has been a favourite with the filmmakers of Bollywood, especially in the animated format.

The 2005-release ‘Hanuman’ was one of the most successful animation films seen in Bollywood and even a well-known director Anurag Kashyap had directed its sequel, ‘The Return of Hanuman.’

Hanuman is set to return in a completely new avatar, in another film ‘Hanuman Da Damdaar.’

The most notable aspect about the film is that Salman Khan has lent his voice to Hanuman in the film.

While the film primarily traces the adventures of the young Hanuman, Salman’s voice has been used for the grown-up Hanuman.

In the trailer of the film, we see Salman mouthing lines like ‘Ek baar jo maine commitment kardi…’ and ‘hataa sawan ki gatha, what about my katha’.

Salman’s character in ‘Bajrangi Bhaijaan’ was a staunch devotee of Hanuman and the song ‘Selfie Le Le Re’ featured chants for the god and Salman bonding with people dressed like Hanuman. The superstar has carried forward his association with the character by lending his voice to this character.

The voices of the other characters in the film are given by Javed Akhtar, Raveena Tandon, Vinay Pathak, Makrand Deshpande, Saurabh Shukla, Chunky Pandey, Kunal Khemu among others.