Kartik Aaryan, Bhumi Pednekar and Ananya Panday will be seen sharing screen space in this adaptation of the 1978 drama with the same title. 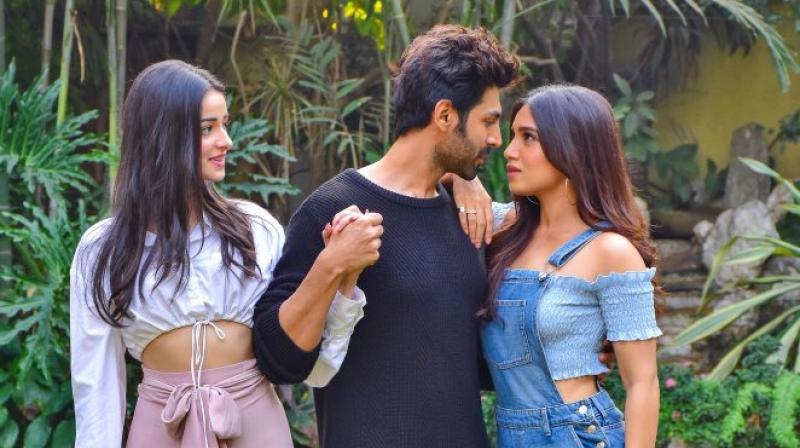 Mumbai: The wait is finally over! After all the speculations about the remake of 'Pati Patni Aur Woh, the makers have finally announced its official cast today. Kartik Aaryan, Bhumi Pednekar and Ananya Panday will be seen sharing screen space in this adaptation of the 1978 drama with the same title. As per reports, the makers have kept the same storyline and contemporised it to fit today's audiences and situations.

In a statement published in Times Now, Bhushan Kumar stated, "We had a great synergy with BR Studios when we worked on Bhoothnath Returns a few years ago. We are happy to produce Pati Patni Aur Woh with them. Juno, Abhay and Mudassar have given an interesting tweak to the story that matches today’s times. Kartik, Bhumi and Ananya are new age actors who are talented and add their spark to the story. We have worked with Kartik in SKTKS and we are glad that we are working again. Bhumi has proven what a fantastic actor she is while Ananya is new but audiences will fall in love with her. The film will so have great music."

As per initial reports, Kartik plays a husband while Bhumi is playing his wife whereas Ananya is playing a second woman. Though the details are not confirmed but it has definitely got us excited for the film.

Pati Patni Aur Woh remake has been in news for many reasons of its casting. Earlier, Taapsee Pannu had slammed the makers for dropping her from the cast at the nth minute. However, the production house refused to agree with Tapsee's allegations and stated that they had approached her but never committed to her.

Directed by Mudassar Aziz, Pati Patni Aur Woh is all set to go floors in February.